Hitmonlee (サワムラー, Sawamurā, Sawamular in original Japanese language versions) is a fictional species of Pokémon in the Pokémon animé, manga, and video game series. It evolves from Tyrogue.

Hitmonlee's name is a combination of hit (suggesting its role as a martial arts pokémon), mon (a common abbreviation for 'monster' in various collectible monster games, such as Digimon and Pokémon), and lee (an allusion to actor and martial artist Bruce Lee).[1] Its Japanese name is most likely a reference to Tadashi Sawamura.

Hitmonlee's anatomy, a humanoid with no discernible head who instead has a face on his chest, is similar to that of the classical Blemmyes.

Hitmonlee is vaguely a humanoid, bipedal monster with a body where its eyes lay on top, a pair of short arms, and two large, flexible legs with three spiky toes each and what appears to be leg warmers on them. His body resembles a foot. He is a diurnal omnivore, though it lacks a mouth, and eats through diffusion. It is an exclusively male species of Pokémon.

Hitmonlee's legs are the most noteworthy features of the Pokémon. The "leg warmers" on Hitmonlee's legs are actually folds of its skin that freely stretch and contract, so that the legs can extend and rebound like springs (hence, its natural ability, Limber, which prevents paralysis). This serves Hitmonlee in both mobility and offense: When in a hurry, Hitmonlee can gradually extend its legs to achieve strides that are extra long and loping, and therefore increase Hitmonlee’s overall traveling speed. In battle, Hitmonlee can perform powerful stretchy kicks with the legs’ spring-like motion that can stretch to almost double their normal length. In addition, it comes as no surprise that Hitmonlee can jump very high with the spring-like power of the legs. The Pokémon also has a perfect sense of balance; it can stand on one leg and use the other to lash out kicks from all angles. The only drawback to its legs is their relative lack of stamina: after each battle, it must rub down its legs and loosen their muscles to overcome fatigue.

Tyrogue will evolve into Hitmonlee if its Attack is greater than its Defense. Other than that, it can only be obtained in Pokémon Red and Blue, Pokémon Yellow, and Pokémon FireRed and LeafGreen by winning it at the Fighting Gym in Saffron City. It can be snagged in Pokémon XD: Gale of Darkness from Cipher Peon Petro at level 38 in the Citadark Isle.

Hitmonlee, in the third generation of pokémon, gets the Limber ability (a rare one possessed only by two other Pokémon, Ditto and Persian) which prevents it from being paralyzed.

Hitmonlee's movelist has been amended multiple times. In the original games, its movelist was predominantly based on kick attacks. However, in recent games, the addition of moves more commonly associated with fighting pokémon (such as Mind Reader and Foresight) and the extremely synergistic combination of Endure (which ensures that Hitmonlee's HP does not go below 1 on the turn it uses the attack) and Reversal (which does progressively greater damage as its user is hurt, eventually becoming a 200 base power attack at 1HP) increased Hitmonlee's versatility, and its popularity somewhat. With the new series of games (Pokémon Ruby, Sapphire, FireRed and LeafGreen, and Emerald), its movepool finally exceeded the slim type coverage of normal and fighting moves when it was given Rock Slide and Earthquake. In Pokémon Diamond and Pearl, Hitmonlee's movelist was augmented even further, as the now-physical fire move Blaze Kick (previously exclusive to Blaziken) was added to its repretoire of level-up moves. This move, its capability to learn Poison Stab, a powerful TM move, and its ability Body Risk, has made Hitmonlee even more diverse and useful than the 2nd and 3rd generations made it. Due to these things, many consider Hitmonlee to be the most usable of its branched evolution line.

Hitmonlee has a minor cameo in the video game Super Smash Bros. as one of several Pokémon which may emerge from thrown Poké Ball's, aiming for opponents with its Hi Jump Kick. Its cry when released was the source of much debate, as it did not appear to say its name like other Pokemon.

Even though he is the Kick Pokémon, he knows a good amount of punch moves from Hitmonchan and Tyrogue.

Hitmonlee's first appearance was in episode 29 (The Punchy Pokémon). Since then, it has also been in Pokémon: The Movie, and it had roles in episodes 42 (Showdown at Dark City; as one of the Yas Gym's Pokémon), 138 (Chikorita's Big Upset), 168 (Two Hits And A Miss), 175 (Wobbu-palooza), 235 (A Tyrogue Full Of Trouble), 275 (Gotta Catch Ya Later), and 403 (Saved by the Beldum). In the Battle Frontier season, Ash Ketchum battles with a Hitmonlee. Jimmy also battles a trainer with one in the Pokemon Chronicles episode 'The Legend of Thunder Pt1'.

In Pokémon Special Hitmonlee makes a cameo in Danger: High Voltorb as a mysterious Pokémon aboard the S.S. Anne.

Hitmonlee later appears as one of Bruno's Pokémon, who destroyed Bill's house. Bruno explains that Hitmonlee's legs are so flexible, it's impossible to locate the position of its knees and attack them.

Hitmonlee was also seen as one of Chuck's Pokémon. In the Gym Leader faceoff of Volume 13, it used Mind Reader and Reversal to turn Green's tactics against him. 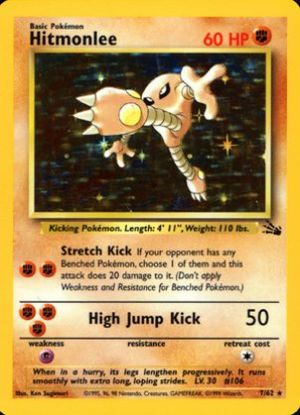 Hitmonlee, as seen in the Pokémon Trading Card Game

Hitmonlee is a Basic Fighting-Type Pokémon in all of its following appearances on this list:

The Unseen Forces card has a Poke-Body titled Stages of Evolution, stating that if Hitmonlee is evolved out of a Tyrogue card, its power increases.