Home Alone 2: Lost In New York is a video game based on the 1992 movie of the same name, it was released on the NES, Sega Genesis, Game Boy, MS-DOS and Super Nintendo Entertainment System systems. Though it is based on the movie in terms of plotline and additional dialogue, the game was different from the movie. The NES port uses sound effects from the early 1990's Simpsons games; Bart vs. the Space Mutants for example. 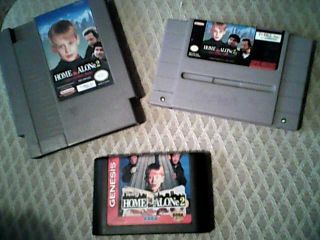 Certain changes made the game more interesting in an interactive game than in a static movie, such as use of different weapons and power-ups for protection, level layouts with enemies not seen in the movie, and for the Uncle's House level, usage of hidden keys and locked doors gained only after luring Marv or Harry into specific traps laid out in the various rooms (aka the first two Home Alone movies), as well as an active scene involving the Bird Woman and her birdseed attacks.

The Super NES version, while boasting a soundtrack with the Super NES traditionally realistic sounding instrument synth, suffered due to slightly post-8-bit graphics and sound effects, as well as a disjointed feel of incontinuity between stages.

The NES version has four different levels, the first of which is the Plaza Hotel. Kevin races through various floors and rooms collecting power-ups and avoiding the hotel staff, crazy guests and runaway vacuum cleaners and suitcases. Before he can escape, however, he has to deal with two bosses: the ever-persistent House Detective and the Master Chef. The next level takes place in Central Park, and is similar to the Plaza Hotel: Kevin collects his goodies while avoiding rats, bats and assorted thugs.

The third level takes place in Kevin's uncle's three-story Townhouse. This time Kevin has to avoid Harry and Marv, and sets up several booby-traps to keep the Wet, er, Sticky Bandits at bay. While doing so, Kevin must also find keys that will allow him to escape to the next floor, and ultimately the Rooftop. Once he's on the roof, Kevin escapes to the streets of New York with the Bandits hot on his tail, until he reaches the giant Christmas tree at Rockefeller Center. It's here where he gets help from the Pigeon Lady to defeat Harry and Marv, have them sent to jail, and finally reunites with his family.

The Sega Genesis version has eight different levels and starts Kevin out at the Airport in which he must make his way to the elevator while avoiding airport passengers, airport security, and Harry who awaits his arrival at the elevator in which Kevin must defeat him using baseballs, a slingshot, or a bazooka shooting sticky balls of unknown material. In the second level Kevin finds himself in "the land of the lost luggage" where he must find his mother's red handbag while avoiding runaway luggage, workers throwing luggage, and of course the wet bandits aka: the sticky bandits. The third level involves Kevin trying to make his way across town to Duncan's Toy Chest avoiding falling Icicles, falling water, cats, people passing by, and the Bandits.

In the fourth level Kevin must navigate his way through Duncan's Toy Chest staying clear of the numerous different toys that try to kill him and Marv and Harry. In the fifth level Kevin must once again make his way across town to get to his uncle and aunt's house all the while battling thugs, men throwing bottles from a window, cats, rats, birds, and the wet bandits along the way. It is at this point the wet bandits now possess new attacks such as Marv's jumping leap attack and Harry can now toss a bag of unknown contents at Kevin making the game more challenging. In the sixth level Kevin has to travel through a pipe leading to his aunt and uncle's house and with a flyswater handy he fights his way to the end swatting hornets and bubbles.

In the seventh level kevin is now in his aunt and uncle's house and must browse through the house avoiding rats and the bandits. Then Kevin comes to the eighth and final level in which he is now in central park and avoiding thugs, birds, falling snow, cats, and the wet bandits who are now desperately trying everything in their power to stop Kevin from jumping up the snow platforms in order to reach the birdlady at the top who saves Kevin and defeats Marv and Harry. The game ends with Kevin and his mother reconciling next to the Rockefeller Center Christmas Tree.

The game has had very low critical reception. Most reviewers complain that various elements of the game change depending on what part of a level the player is on; for example, the slide attack is an effective move on one part of the level, but does not work on another.