Hoppip (ハネッコ, Hanekko, Hanecco in original Japanese language versions) are one of the 493 fictional species of Pokémon creatures from the multi-billion-dollar Pokémon media franchise – a collection of video games, anime, manga, books, trading cards and other media created by Satoshi Tajiri. The purpose of Hoppip in the games, anime and manga, as with all other Pokémon, is to battle both wild Pokémon, untamed creatures encountered while the player passes through various environments, and tamed Pokémon owned by Pokémon trainers.

The name Hoppip is a combination of the words hop, to jump with short leaps,[1] and pip, the term for small seeds within fruit.[2] The names of the Hoppip family, Hoppip, Skiploom and Jumpluff, come from words that all mean to leap high. The names also form a sort of pun from the phrase "A hop, a skip, and a jump away," meaning a short distance.[3]

Hoppip are small, spherical creatures, with long leaves protruding from their head. Judging from its evolutions, and the fact that it's leaves are long and jagged, Hoppip may be designed after the same life cycle of a Dandelion plant. They have small, gripping feet and ears disproportinate to their body, used to listen for winds.[4] Hoppip have extremely petite and almost weightless bodies, and are susceptible to strong winds due to this. When a Hoppip feels a gale approaching, it will lock the leaves on its head with the leaves of other Hoppip, in an attempt to not be blown away. If a Hoppip is by itself when in heavy winds, it may grip the ground with its feet to prevent this. Despite the dangers Hoppip face in strong winds, they enjoy gentle breezes and can float on the calmest of winds, which can even carry them vast distances.[5] Some fans compare it to an Oddish.

Hoppip are obtained in the wild in Pokémon Gold, Silver and Crystal.[6] A player can also trade the Skiploom from Pokémon Colosseum,[7] to a compatible Game Boy Advance game cartridge and breed it to hatch a Hoppip.[8] Multiple Hoppip can also be caught in Pokémon XD: Gale of Darkness, in the Oasis Poké spot. In Pokémon FireRed and LeafGreen, Hoppip can be caught in various areas of the Sevii Islands.[6]

As Hoppip are Grass-/Flying-type Pokémon, their Grass attacks are particularly effective against Water-, Ground- and Rock-type Pokémon, while their Flying-type attacks are particularly effective against Fighting-, Bug- and other Grass-type Pokémon. However, Fire-, Poison-, Flying-, and Rock- attacks are effective against it, while Ice-type attacks are very effective against it, due to Hoppip's dual Grass/Flying type both having weaknesses to Ice attacks. Water, Fighting, and Grass attacks deal little damage to Hoppip, and Ground-type attacks do no damage to Hoppip at all.[9] Hoppip statistics are generally poor all round (it's highest ones are Special Attack, Special Defense and Speed) but they have the ability to undergo evolution,[10] a metamorphic change within a Pokémon caused by gaining experience in battle,[11] twice. They evolve into their Stage 1 (middle) form, Skiploom, at level 18, and then into Jumpluff, their Stage 2 (final) form, at level 27.[10] Each time a Hoppip evolves, its stats improve,[12][13] making the problem less relevant.

The Pokémon anime series and films are a meta-series of adventures separate from the canon that most of the Pokémon video games follow (with the exception of Pokémon Yellow, a game based on the anime storyline). The anime follows the quest of the main character, Ash Ketchum[14]—an in-training Pokémon Master—as he and May (as well as several other companions[14]) travel around the fictitious world of Pokémon along with their Pokémon partners, Pikachu and Torchic.[15]

Hoppip have had a number of cameo appearances in the anime, such as in the third Pikachu short, where they help Pikachu to cross to another building without falling onto the busy road.[16] The only central anime appearance was in Episode 139, "Foul Weather Friends", in which, Ash and Friends meet a Hoppip trainer called Mariah, who used Hoppip to predict the weather.[4] James of Team Rocket briefly owned a Hoppip in Episode 360, "Who's Flying Now", when he was in Fortree City. The Magikarp Salesman, a recurring character, conned him into buying it, as it was disguised as a Chimecho, however, it flew away as soon as this was discovered.[17]

Oca uses an octet of Hoppip to lift him up in a basket for flight transport. 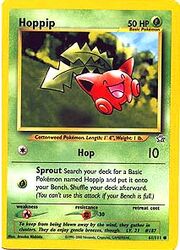 The Pokémon Trading Card Game is a collectible card game similar in goal to a Pokémon battle in the video game series; players must use cards (with individual strengths and weaknesses) in an attempt to defeat their opponent by "knocking out" all of his cards.[18] The game was first published in North America by Wizards of the Coast in 1999, until Nintendo USA started publishing the series in 2003.[19] Hoppip has made several appearances in the Pokémon Trading Card Game, in the Neo Genesis, Neo Discovery, Neo Destiny, Expedition, Aquapolis and EX Team Rocket Returns sets, as a Basic Grass-type.[20]