Horsea's name comes from an inverting of the parts of the compound word seahorse. It is also a pun on the word "Horsey" but is spelled "horsea" because of its habitat. Its Japanese name seems to be derived from 辰 tatsu, the zodiac dragon.

If a Horsea senses danger, it will vigorously spray water or a special type of ink from its mouth while using its tail to keep its balance. Horsea have been known to shoot down flying bugs with precision blasts of ink from the surface of the water (Compare to Qwilfish).

If attacked by a larger enemy, Horsea will quickly swim to safety by using its dorsal fin. While in a safe location, Horsea can be seen playfully tangling their tails together. They make their nests in the shade of corals.

Horsea eat small insects and moss off of rocks. If the ocean current becomes too fast, then the Horsea will anchor itself by wrapping its tail around rocks or coral to prevent being washed away. Much like a real seahorse, the father takes care of the young.

Horsea can be found in the Red, Blue, Gold, Silver, Crystal, in all cases by fishing with rods in many bodies of waters.

In the Ruby, Sapphire and Emerald versions, Horsea is quite uncommon and can be found by surfing or fishing on Routes 132,133 and 134 with a Super Rod, or can be traded in Pacificlog Town.

In Pokemon FireRed and LeafGreen, Horsea can be found in the waters of Pallet Town, Cerulean City, Lavender Town, Cinnabar Island, One Island and Seafoam Islands. Its distribution is wider in FireRed.

Horsea can be found in Pokemon Diamond and Pearl by fishing on route 226 with the good rod.

Horsea is not found in the wild in Pokemon Colosseum and XD, and must be traded from the previous versions.

Horsea has poor Special Defence but solid Defense, Special Attack, and Speed stats for a Basic Pokémon, which helps it in being trained for evolution into Seadra at level 32. Horsea can learn the Octazooka attack by breeding with Octillery, and it can pass this attack onto its evolved forms. Wild Horsea, just like its evolutions, have a 5% chance of holding the Dragon Scale item, and since Horsea are quite common throughout the five GBA versions, one just uses a Pokémon with the Thief move to acquire a Dragon Scale from them. The Dragon Scale happens to be the item that must be attached to Seadra before trading it so that it can evolve into Kingdra.

Its cry is nearly identical to Meowth's.

In the anime, Misty has a Horsea which she uses as one of her main fighters. They say Horsea is noble and it is supposed to be like a princess' horse. Because of this they use him to try to get Snorlax to wake up (immediately after Misty saying that Horsea is their best bet, Psyduck pops out of its Poké Ball, without Misty's OK, and kisses Snorlax). In "The Misty Mermaid," Misty gives her Horsea to her sisters at the Cerulean City gym. It reappears when Misty takes over the gym in Pokémon Chronicles, though usually at feeding time. Horsea has been speculated by fans to be Misty's strongest Pokémon. It is speculated that Horsea could be based on the Tatsunoko Productions seahorse because of its apparent similarities.

A small number of Horsea appear in the ninth movie.

Horsea appears in chapters 32, 69, 30, 59, and 83 of Pokémon Adventures. In all cases, it is owned by Blue. Lorelei is particularly impressed by it. 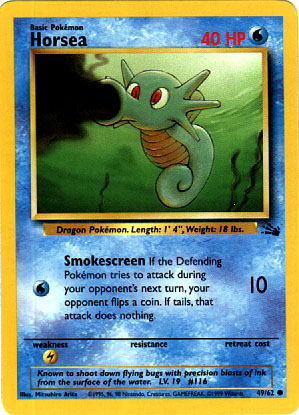 Horsea has appeared on numerous trading cards, almost always as a Basic Water Pokémon. It is a common card in Fossil, Gym Heroes (as Misty's Horsea), Gym Challenge (as Misty's Horsea), Neo Genesis, Aquapolis (twice), EX Dragon, EX Team Rocket Returns, EX Holon Phantoms (as a Fire-type), and EX Dragon Frontiers (twice, both as Fighting-types). There is also an additional Horsea card that is uncommon in EX Dragon.