Houndoom (Hellgar in original Japanese language versions) is a Pokémon from the Pokémon media franchise. The purpose of Houndoom in the games, anime, and manga, as with all other Pokémon, is to battle both wild Pokémon, untamed creatures encountered while the player passes through various environments, and tamed Pokémon owned by Pokémon trainers.[1]

Houndoom's name is a portmanteau of the words hound, which refers to dogs, and doom, which means unavoidable misfortune and destruction. The name Houndoom refers to the species as a whole, as well as individuals in the games, anime and manga.

Houndoom is dog-like in appearance, resembling the Doberman breed, but some of its features closely match the stereotypical image of a hellhound. Houndoom has two long curved horns on its head, a tail that ends in a spaded tip, and two bony rings around each ankle. These horns are larger in the male.[2] It also has three bony semicircles on its back and a bony collar around the neck. A Houndoom's fur is mostly black, but its muzzle and underbelly are reddish brown. A "shiny" Houndoom is dark blue instead of black, which is sometimes also seen in Dobermans under certain lighting conditions.

Houndoom live in packs, whose leader is decided by fierce fighting among its members. The leader develops horns sharply raked towards its back to display its dominant status. A Houndoom's body is filled with toxins. It releases these in the form of a toxic gas through its mouth, and, if inhaled by other Pokémon, is quite deadly. Houndoom is one of the most feared predators among Pokémon. Just the sound of its howl is enough to send all other Pokémon which hear it hurrying back to the safety of their nests.

Houndoom is particularly infamous for its fiery breath. While most Fire-type Pokémon have the ability to breathe fire, Houndoom's flame has a special property. Thanks to the toxins in its body, a burn inflicted by a Houndoom's pungent flame will cause persistent pain that can never be alleviated. This is why Houndoom is so greatly feared; if it burns you, you'll feel the pain of that burn forever with no hope of relief. Nevertheless, the burn status ailment caused by a Houndoom in the video games behaves in the same way as all other burns.

Houndoom first appeared in Pokémon Gold, Silver, and Crystal. In Pokémon Colosseum, Houndoom is a Shadow Pokémon that can be snagged in Realgam Tower. In Pokémon XD, a Houndour can be captured at one of Cipher's lairs, which can then be evolved into Houndoom. In the third generation games Houndour can only be caught in the Safari Zone in Pokémon Emerald after defeating the Elite four.

In Pokémon Pearl Houndoom can be caught on Route 215 using the Poké Radar.

Houndoom have made several appearances in the anime. Its first appearance is in episode #182, "Houndoom's Special Delivery," in which a Houndoom helps Misty's Togepi when it is lost in a forest. It has also been used by a Pokémon Hunter in the fourth Pokémon movie Celebi: Voice of the Forest; by Harrison against Ash during the Silver Conference in episode #274, "Johto Photo Finish"; by Team Magma in episode #303, "A Three Team Scheme"; and by a Pokémon Coordinator named Josh in episode #823, "Mean With Envy," episode #824, "Pacifidlog Jam." and is one of Kamon's (Ash's Rival) main Pokémon, probably used to rival Ash's old Charizard. Kamon's Houndoom's first appearance was in episode #403 "Battle of the Doppelgangers". In "The Ties that Bind" a Houndoom was also one of the Pokémon seen in Gary Oak's profile. Also, three Houndoom are seen attacking Lucario early on in the eighth Pokémon movie Pokémon: Lucario and the Mystery of Mew. 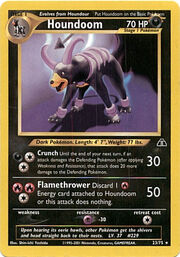