Houndour (Delvil in original Japanese language versions) is a species of Pokémon found in the Pokémon series.

The purpose of Houndour in the games, anime, and manga, as with all other Pokémon, is to battle both wild Pokémon — untamed creatures encountered while the player passes through various environments — and tamed Pokémon owned by Pokémon trainers.

The name Houndour is a portmanteau of the words hound, which is another word for dog, and dour, which means gloomy or very stern. Its Japanese name is a pun on the English word devil.

Houndour has the appearance of a small dog, resembling the Doberman and Rottweiler breeds in shape and coloration. Its fur is black, while its muzzle and underbelly are red. Its forehead is covered in a skull-shaped formation, and bone-like rings cover its back and ankles. Houndour's rather gloomy coloration could also be attributed to the "hellfire" color scheme, a mode of coloring that often reminds one of evil, fiery villains that are so popular in today's media.

Houndour is a nocturnal carnivorous Pokémon that organizes itself in packs. A Houndour pack works with perfect teamwork to pursue prey. Individual members of the pack approach the intended target from different spots and begin the hunt. They then communicate their location to each other using special howls, ensuring that the victim is eventually surrounded and unable to escape.

Houndour is featured in the Pokémon video game series. Originally in Japanese, but later translated into other languages, the games have sold over 143 million copies worldwide.

In Pokémon Gold, Silver and Crystal, Houndour is uncommonly found in Route 7 during the night. It is more common in Crystal. In Pokémon FireRed and LeafGreen, Houndour may be encountered in the Altering Cave if the e-card reader is used correctly. In Pokémon Emerald, Houndour can additionally be found in the Safari Zone. In Pokémon XD: Gale of Darkness the Hexagon Brother Resix had one to snag.

Houndour has very good Special Attack and decent Attack and Speed. Its defenses are low, though. It learns naturally decently powerful Fire and Dark-type moves, such as Flamethrower and Crunch. Players usually prefer using Houndour's evolved form Houndoom in battle, since it has much better stats to support itself. Houndour evolves into Houndoom at level 24.

The Pokémon anime series and films are a meta-series of adventures separate from the canon that most of the Pokémon video games (excepting Pokémon Yellow) follow. The anime features the quest of Ash Ketchum, a young Pokémon trainer, as he and several other companions travel around the world with their Pokémon partners.

Houndour was featured in episode #152 (Hour of the Houndour). A pack of Houndour had stolen Ash's backpack in order to help an injured pack member. After realizing this, Ash managed to befriend the pack and carried the injured Houndour to the Pokémon center for healing.

A Houndoom also often appears in special episodes starring the Pichu brothers. It usually ends up chasing the two siblings because they have accidentally disturbed its sleep with their antics. 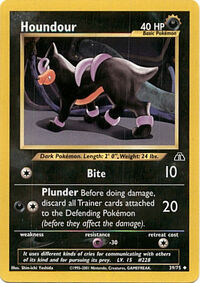 Houndour has made many appearances in the TCG in which players simulate Pokémon battles.[1]

Sometimes Houndour has appeared as multiple cards in a single expansion. Houndour appears as a basic stage Fire and Dark type Pokémon.