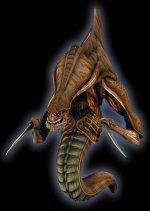 Hydralisks are ranged assault units of the Zerg organism from the game Starcraft. The name Hydralisk is thought to be derived from its position as one of the most numerous and deadly units of the Zerg swarm. Much like the Hydra of Greek myth, most believe that killing one will only cause two to take its place until their target is overwhelmed.

The most widely recognized member of the Zerg swarm, the Hydralisk holds a special position due to its niche as the only ground-based anti-aircraft and ranged unit the Zerg have. This, combined with the relatively minimal requirements to spawn, makes them essential to the success of almost every planet-bound operation, both offensive and defensive, the Zerg undertake. A common tactic is to swarm the area with the more expendable Zerglings while the Hydralisk comes in behind the main force and targets any air units attempting to defend the assaulted position.

The Hydralisk is believed to have evolved from a peaceful, herbivorous species known as the Slothien. One of several Confederate probes, launched to find new habitable worlds to colonize, landed on the Slothien's homeworld and sent back a great deal concerning the environmental conditions there. Sadly, during the Civil War between the Terran Confederacy and the Sons of Korhal, much of this information was lost except for that pertaining to the slothien. Due to the limited information retrieved it is impossible to draw any links between the evolutionary paths of the races of the Slothien's homeworld. Any further study is also impossible as the biosphere was completely wiped out by the Zerg swarm, leaving no traces of life.

The original Slothien species resembled a very large caterpillar. It was about three meters in length and propelled itself using two pseudo-limbs on its upper body as well as a snake-like winding motion with its lower body. Having no actual bone structure, the Slothien's body was almost pure muscle, allowing it some protection from the predators of the world. Another evolutionary trait developed for protection are a series of quills that grow on the outside of fleshy sacs on either side of the its head. The quills are made of reconstituted and compressed vegetable matter and have an approximate consistency of tree bark. When threatened the Slothien is able to explosively inflate the sacks and launch the bark-quills at an enemy. This has caused most predators to avoid direct confrontations with the Slothien, allowing them to graze in peace. With the coming of the Zerg Swarm the Slothien's form was irrevocably changed. Seeing use in the ranged attack ability of the slothien, the Overmind absorbed them into the swarm. During the process their soft upper bodies and heads were covered with a hard carapace for protection, their pseudo-limbs were lengthened and reinforced with more carapace and a powerful blade was added to the tip of each limb, and, most horrifically, their minds were warped and twisted. Far from being the quiet, peaceful herbivores they once were, these new beings were vicious and cruel. They harbored a new found delight in the torture and devouring of other life forms. They now accompany the swarm as a supporting ranged attack unit and are one of the most feared beings in the Zerg collective.

Rumors exist of a more powerful version of the Hydralisk. Dubbed "Hunter Killers", these beings are used by the Zerg Cerebrates as an elite hit and run team. They are far more accurate with their quills than other hydralisks and can move with astonishing quickness and silence. Their intelligence has also been increased a great deal as well. A Confederate Science Vessel managed to capture a wounded specimen after a battle and place it in a stasis unit until they could return to a better equipped facility to study the creature. The ships logs showed that the creature somehow managed to escape from a Class 3 Stasis Unit and kill every living creature on board the ship in less than 24 hours. Researchers believe that, if it hadn't toyed with most of the scientists for so long, it could have accomplished this in a fraction of that time.

Like every member of the Zerg swarm, Hydralisks are completely loyal to the Overmind. Everything they do is merely an extension of orders relayed to them through their Cerebrates and Overlords. This being said, they seem to take a sadistic pleasure in toying with enemies that lack the ability to threaten their missions objective. They will wait just out of lethal range while a paniced marine empties every clip he has and then move in and immobilize him. The next few hours are best not thought of.

Being more independent also leads to them occasionally breaking from the predetermined attack plan of a swarm in order to exploit any weakness or vulnerability they might happen to notice. It is believed that this increased independence and intelligence gives rise to a greater amount of the Cerebrates control being required in order to keep them loyal to the Overmind. A unit of Hydralisks are often assigned an Overlord to ensure that they are under constant supervision.

Several studies of Hydralisk bodies found on the battlefields have shown that their spines are crawling with a bacteria that seems to be using the Hydralisk as a host creature. When it enters the body of another life form it immediately begins to attack and devour their white blood cells. This leads to a serious, nearly incurable infection in the area of the wound. It is recommended that a wounded limb be amputated immediately. If the wound is on the torso or head, cauterize it immediately and administer a wide range anti-biotic. In either case, the victim should be quarantined for a period of no less than a week to ensure containment of the bacteria. All amputated limbs as well as the bodies of victims that don't survive should be burned in order to eliminate all traces of the contagion.

As a member of the Zerg swarm the Hydralisk has no real habitat. It can survive in almost every environment. Although, curiously, a Hydralisk has never been seen in a body of water.

The most effective way to combat a Hydralisk attack is to attack with greater numbers or from outside their range. A squad should focus all their fire on a single Hydralisk in order to deny the enemy a numbers advantage as quickly as possible. When feasible, conduct attack operations using Siege Tanks in order to deliver a killing blow from a safe distance.