Hypno (スリーパー, Surīpā, Sleeper in original Japanese language versions) is one of 493 fictional species from the Pokémon franchise. The name "Hypno" originates from the word "hypnosis", as Hypno hypnotizes foes with its pendulum. Hypno is never shown without its favorite pendulum, which it uses to put others to sleep.

Hypno is a curiously sinister Pokémon that puts other Pokémon and people to sleep. It does so by swinging the pendulum, which it carries in its hand all the time. When hunting for prey, it will polish the mysterious pendulum. Hypno's appearance is described with its yellow complexion, its large pointy ears, its round head, its big fluffy collar hiding its neck, its shifty eyes, and its trunk-like nose. This collar of fur is larger on the female than on the male.[1] Hypno was based on the Baku, a mythical creature from Japan, which was known as the eater of bad dreams.

Eating the dreams of its foes is another sinister ability of Hypno. However, stomach pains will ail Hypno if it eats a nightmare (although it is capable of inducing nightmares via the Nightmare move, which it can learn via the Move Maniac). At dusk, some Hypno will appear near schools and less-traveled roads. This may be to scare children and travelers at night and hypnotize them. In fact, there was once an incident where a Hypno hypnotized and kidnapped a child.

Hypno relaxes its body by meditating; it practices yoga. Hypno never sleeps, as evident by its Insomnia ability. Instead of sleeping, it probably energizes itself with meditation and by eating the dreams of those it puts to sleep. Hypno's menacing and semi-parted eyelids look sleep deprived.

Hypno is one several species of Pokémon that uses an object to aid it in battle (in Hypno's case a pendulum). Other Pokémon that use objects to fight or aid them in battle are Farfetch'd (which uses a leek like a sword), Cubone & Marowak (both which use bones like clubs and boomerangs), and fellow Psychic-types Kadabra & Alakazam (both of whom carry silver Spoons, Kadabra uses one spoon, while its evolved form Alakazam uses two). Despite the fact that these Pokémon now have hold items that represent the objects they use and usually benefit that Pokémon when said item is held by that Pokémon it battle (i.e. Farfetch'd's "Stick" item, Cubone/Marowak's "Thick Club" item, and Kadabra/Alakazam's "Twistedspoon" item), Hypno does not (as of yet) have a hold item that represents its pendulum.

Hypno must be evolved from Drowzee at level 26 to be obtained. However, Hypno is available in the Cerulean Cave in Pokémon Red and Blue. Hypno is later obtainable in the Berry Forest in Pokémon FireRed and LeafGreen. One Hypno in particular can be found menacing the missing daughter of the Two Island Game Master, Lostelle, and must be defeated (it can also be captured) to save Lostelle and return her safely to her father.

In Pokémon XD one could be snagged from Cipher Admin Gorigan at the Pokémon Factory.

In Red and Blue, Hypno can be taught the move Dream Eater via TM. When used in conjunction with its signature move Hypnosis it proved to be a powerful attack that also healed the Hypno. In Pokémon Gold and Silver, it could be taught Nightmare, which could be used in a similar way as Dream Eater (i.e. only while the opponent was asleep), though it dealt damage over time rather than sapping hit points. Hypno could also learn Dream Eater via TM as before.

Hypno was featured in episode #27, "Hypno's Naptime". It was under the ownership of the Hophophop Town Pokémon Lovers Club and, as a Drowzee, it used its hypnotic abilities to deal with their insomnia problems. However, once it evolved into Hypno, the wavelength of its psychic waves changed and inadvertently caused many people to behave like Pokémon and many Pokémon to lose their vitality. The Club's other Drowzee was used to cure these effects.

Hypno also appeared in episode #273 ("Playing with Fire") as one of the Pokémon Harrison used against Ash in the Silver Conference. 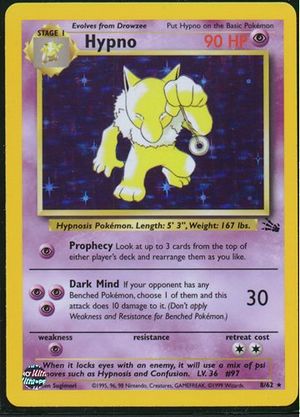 Hypno has appeared in the following sets of the Pokémon Trading Card Game: