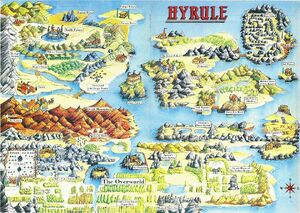 A map of the Land of Hyrule from a Zelda comic.

Hyrule is the name of the kingdom in which many of the Legend of Zelda games take place. In Japan, it is called Hylia. It's appearance and geography changes in each game, giving the impression that Hyrule undergoes drastic changes throughout its long history. Along with the central and important Hyrule Castle, Hyrule (for some reason) is also home to a suspicious amount of temples and dungeons.

Hyrule first appeared in the first Zelda game, The Legend of Zelda for the NES.

Hyrule has been the home of many different races and species. Some of these races have existed at different times, or are descended from each other. 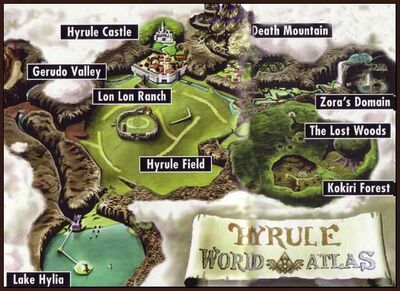 Hyrule, as it appears in Ocarina of Time.