I, Cyborg is a shooter set in a partial 3-D environment viewed in a behind the player perspective. Somewhat like the unreleased Vectrex game of Dark Tower, the player moves a big cyborg throughout several levels, seeking revenge after being wrongfully imprisoned and either avoiding or destroying everything in its way.

As the player moves throughout an area, at various times a trap will be triggered, releasing an enemy (or a set of them) from the top or side areas of the screen, which will then attack the cyborg. Enemies either come out in a set number, while others will keep on reappearing indefinitely until the player moves forward a certain amount until the trap deactivates itself. Enemies can also shoot or ram into the cyborg, causing damage, which is denoted by a number on the cyborg's back. The cyborg starts each area or phase with 10 health units, which a collision with an enemy or it's weapon will drop the cyborg's health down by one, except for an encounter with Decapitators, which will instantly end the game upon contact. Meanwhile the cyborg can counterattack with an acid mist that can be aimed in three directions.

Each area (except for the final one) is comprised of four phases plus an end of area boss, which the player is granted a special weapon that can only be used against that boss (the player's regular weapon's firing range will not reach any of the bosses). Key codes are awarded to the player after defeating each area so they can just skip to that level, rather than starting each game over from the beginning. The codes are unique to each game and were released by creator Fury Unlimited once all copies of I, Cyborg sold out.

This is a limited edition cartridge with a run of only 250 copies made when it was released in September, 2004. The I, Cyborg: Edition X was released on June 18, 2005, having a level selector instead of key codes and some slight gameplay changes, such as the cyborg having a mohawk in this version, and then the I, Cyborg: OMEGA version was released on August 19, 2005, having it’s only copy sold on e-bay for $510.00. All versions of the game are for one player only.

This could be the corridors of the prison the cyborg is trying to escape from. There are a series of archways, several of which have Shockers that will fire a shot at the player, taking away a health unit when making contact with the cyborg. Firestars are also present, being wide and swooping at an arc towards the player and cannot be destroyed; they will also take away a health unit if they collide with the player. Decapitators have to be shot or else just coming into contact with the cyborg will end the game right then and there, no matter how much health is remaining.

At the end of the first area, the player is presented with their first special weapon of Remote Grenades, which its icon resembles a guitar pick. Pressing button three launches a grenade straight up, and pressing three again detonates it. This end area boss is the Eye of Fury, which shoots rays out of its eye at the player and takes 20 hits with the Remote Grenades to send it away, which the player is awarded a key code and then allowed to proceed into the second area of the game. 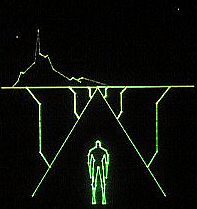 that change position with each phase. The player faces Flying Filth, which attack the player from the sides, Cycloptic Arachnoids, which are like giant spiders that jump from side to side and then hover directly over the player while shooting a ray from its underside, and Warbirds, which appear over the horizon like the Cosmic Dragon in Web Wars, then flies over the player and shoots a ray that covers part of the player’s walking area. The Warbirds are too far out of the cyborg’s firing range to be shot.

The player’s special weapon at the end of this area are Remote Hover Grenades, which pressing button three will fire them, pressing it again will cause them to hover in the air, and then one final press of the button will detonate them against one of The Binary Orbs, which move quickly while shooting down at the player, first at diagonal angles, then straight overhead. Each Orb takes several hits each (15 total to destroy each one) before they change their attack patterns, which they have three different patterns in all (they attack first in the upper corners of the screen, then overhead, then the last one will move side by side while firing).

Also, at the beginning of this boss showdown, it is revealed the Orbs are the two “stars” in the background in the sky.

Some of the elements in this area are a bit of a rehash of the first one. The player walks down an almost identical corridor (although the arches are shaped differently) and Rods behave identically to the first area’s Firestars. However, Rings of Fire resemble flaming Hula Hoops and cannot be destroyed, while Electrochasms appear at the ends of corridors and suck the cyborg to its death (no matter how many units of health are left) if not dealt with quick enough.

The player is presented with Omega Disks here, which only need one press of the button to throw. Vectoria is this end of area boss, who seems to have disks of her own that she hurls at the player and requires 40 hits to be destroyed, which she will then fall apart in an almost identical manner to one of the player’s death animations.

This is a short area, only having one phase, as the player’s cyborg appears to be walking on some kind of catwalk in the sky. Falling Stars attack from the side (like the Flying Filth from the second area) and PR-1572 Units are robots that will shoot beams at the player from the sides of the screen. However, if the player damages them enough, they will raise they heads up and pass the player by without attacking.

The final special weapon in this game is The Cosmic Boomerang, which, like the previous Disk, only needs to be thrown. However, caution must be taken, as if it is not caught, it will not return and the player will be totally defenseless against Prince Thunderhead, a huge entity (that vaguely resembles Kryten from the British TV comedy Red Dwarf) who relentlessly, quickly fires at the player from his mouth. He takes 50 hits before he is sent away and a congratulation message is presented onscreen when he is defeated.

Along with playing the game from the beginning, there is also the choice of entering a key code to skip levels and creator Fury Unlimited’s address can also be accessed from the menu screen.