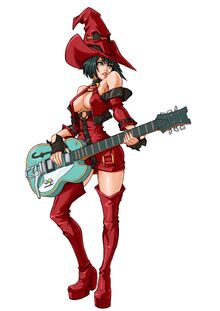 I-No is a character in the Guilty Gear fighting game series, making her first appearance as a boss of the third game, Guilty Gear XX: The Midnight Carnival; unlike bosses in previous games, she is freely playable from the start. Very little is known about her; in fact, her profile in Guilty Gear XX consists entirely of "UNKNOWN!!" repeated several times over. Information given thus far is also somewhat unclear as to the nature and origin of her hat. The hat resembles a witch's hat and seems to be animate. She also seems to derive pleasure from tormenting Dizzy.