Iter Vehemens ad Necem (IVAN) is a free graphical roguelike game, which currently runs in Windows, DOS and Linux. IVAN is licensed under the GPL. The latest version, 0.50 was published on 2004-12-10. For several months in 2005-2006, IVAN development appeared to have ceased. While the IVAN wiki has been broken for several months, the ChangeLog in CVS shows recent activity and bugfixes, beginning in mid-August 2006.

Unlike most roguelikes, which use ascii graphics, IVAN uses an SDL-based tile graphics engine. This allows much more information to be displayed in the level map. For example, when the player or some monsters wield a weapon or wear armor, it's normally visible on the map. Also, several types of fluids (such as acid, blood, vomit, etc.) are visible on the map. This makes it possible to track a wounded monster by following a trail of blood across the dungeon. 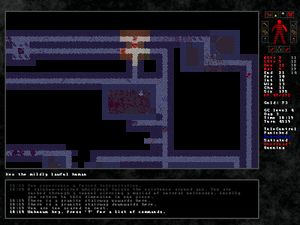 IVAN employs an advanced bodypart handling system. In battle, one loses only if the head, torso, or groin is destroyed. If one's arms or legs take too much damage, they become severed, and the player will merely become disabled, and unable to wield a weapon with that hand, or have to bear greater burden. Many monsters can lose body parts as well. There are several ways to replace or reattach a lost limb, such as drinking healing potions or praying.

Another unique feature is the handling of materials. Each item, including body parts, has a material associated with it. There are several ways to change materials, such as scrolls or praying. For example, a hardened leather body armour may become significantly stronger if transmuted into a meteoric iron one. As this applies to body parts, one could harden a severed limb into stone or metal before reattaching it, thereby gaining a massive strength boost of strength at the cost of dexterity.

This game is designed to be notoriously difficult. Unlike most roguelikes, where lesser enemies become easier to overcome as the player gains superior weapons and equipment, IVAN actively compensates for player advancement by advancing the basic monsters so that even a carnivorous mutant bunny, one of the weakest monsters, is still a threat to a high-power character. There are also many traps scattered about the lower levels, such as land mines, which can easily cripple or kill the player. Additionally, the later monsters are considered much tougher than most other roguelikes (especially the named monsters). In this spirit, any possibility of defeating the final boss is usually treated as a bug by the developers, hence the name, which translates from Latin as 'Violent road to death'.