Ichiro Tusnami is a character from Mace: The Dark Age. 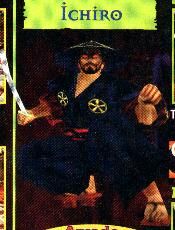 The first son of the Imperial family of the Tsunami, Ichiro believed that his status of being the first born son would allow him to succeed his father as being Emperor of Japan. Unfortunately, this would not come to be as his younger brother: Takeshi has proven to be the better warrior, fearing that Takeshi would be chosen as the successor over him, Ichiro tried for years to prove that he's the better sibling. Then, Ichiro has heard of a man named Asmodeous who will grant supreme power to those who serve him, so Ichiro traveled west to join Asmodeous. When Ichiro returned to Japan, he was filled with the anger and rage that was powered by the Mace, he forms his own rebel army in an attempt to usurp the family throne. As his forces conquer his home country one prvince at a time, Ichiro's dark desires have quickly become unsatisfied, he sets out on a journey to find the actual Mace in hopes to defeat his brother: Takeshi and conquer Japan.

Ichiro defeats his former master: Asmodeous and obtains the Mace. With the mythical weapon in hand, he would go on to usurp the imperial throne from his father and eliminate any Japanese warlord that may remain and become the new emperor of Japan. However, his new rule will be challenged by none other than his brother: Takeshi, who Ichiro failed to eliminate in his rise to power. A fierce war breaks out which would split Japan into 2, Ichiro's forces would go all over the country and destroy one village after another searching for Takeshi who formed his own rebel army in hopes to overthrow his evil and obsessed brother from the Imperial throne. Ichiro's insanity would grow ever stronger as he tries to find his brother, and knows all too well that Takeshi will lay claim all that he conquered if he fails.

Ichiro fights against his former master: Asmodeous and loses. Because of his attempt of rebellion against the evil being, Ichiro becomes a full loyal servant to Asmodeous by the power of the Mace, furthering Ichiro's inner turmoil against his evil desires and his fellow man. Nevertheless, Asmodeous ordered the execution of Ichiro for his rebellious acts against the evil holder of the Mace. Ichiro was drawn and quartered to vanquish the evil inside of him and have his entrails sent to all corners of the world. All that remains of Ichiro now are his rebellious acts against his home country of Japan and Asmodeous.