Igglybuff (ププリン, Pupurin in original Japanese language versions) is one of the 493 fictional species of Pokémon from the Pokémon Franchise – a series of video games, anime, manga, books, trading cards and other media created by Satoshi Tajiri.

Igglybuff resembles a small pink balloon. It has a round body with four tiny appendages. On top of its head there is a tuft, and on its forehead a counter-clockwise swirl. It has two red eyes, unlike the teal ones its evolutions have. Because of this, it is sometimes considered the cutest of all Pokémon. But, it also makes it look weak, due to its small body.

Like its evolutions Jigglypuff and Wigglytuff, Igglybuff's body shares many properties with a balloon. It is very soft, elastic and flexible and somewhat feels and smells like a marshmallow. This enables it to bounce a long way, to the extent that Igglybuff finds it more efficient to move around by bouncing instead of walking on its two short legs.

Although Igglybuff too has the notorious singing ability of its evolutionary chain, its vocal cords are not yet fully developed in this early stage of its life. A prolonged singing effort results in Igglybuff turning a deeper and deeper pink as it strains itself, finally ending up damaging its throat. Igglybuff tends to gargle with clear springwater to soothe itself.

The Igglybuff was featured in episode #245 (Same Old Song and Dance), where two twin Igglybuff are part of an artist's singing and dancing routine. The wild Jigglypuff who is recurring character in the anime is shown to be jealous of the attention the Igglybuff twins receive. In another episode, Ash Ketchum looks at an advertisement, and one of the Pokémon on the ad is an Igglybuff. Also, in an episode of Pokémon Advance Challenge, Ash wants to battle Norman, the gym leader of Petalburg City. But other trainers get mad, and think Ash isn't worthy to challenge Norman, so they battle him. One of the trainers' Pokémon is an Igglybuff.

In the short Pichu and Pikachu, one of the members of the Pichu Brothers' club is an Igglybuff.

In the manga, Whitney is seen to have her own Igglybuff. 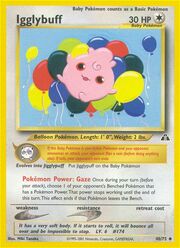 Igglybuff in the Pokémon Trading Card Game (Base Set).

Igglybuff's name is styled in a similar way to its evolved forms, Jigglypuff and Wigglytuff, implying their relationship. "Iggly-" rhymes with "Jiggly-" and "Wiggly-", the beginning of the names for its evolved forms; "-buff" likewise rhymes with the end of its evolved forms' names, "-puff" and "-tuff", and could also refer to the fact that it is oddly strong for its looks. Whatever the case, Igglybuff and all its forms share similar names in every language.