It's not a fast game, but it's more frantic than more typical racing games.

Iggy's Reckin' Balls can only be described with one word: Weird. After the successful Turok: Dinosaur Hunter, many players and industry observers were confused when Iguana Entertainment announced that their follow up project with a non-traditional, non-violent racing game. Publisher Acclaim advertised the game as a "vertical racer", with character design that was similar to Mad Balls and game mechanics akin to DMA's Uniracers.

The game objective is simple: get to the end of the race before your opponents does. The concept sounds like a simple racing game, but it plays like no other racing game. Imaging a multi-storied parking garage, and every layer contains a path that are layered ontop of each other, that is the basic structure of an Iggy's Reckin' Balls' race track. A typical race track will have players starting off at the bottom of a track, at which point they will race each other (or against the computer) for a race to the top. The player's avatar can advance forward by moving along the track, or they can move to a different track above or below them by using a grappling arm. Multiple branching platforms gives the players choice in a race to the top of the course, some of which might help you, some of which might hurt you. The AI opponents add an extra of frantic gameplay as the grappling arm can also be used as a weapon to grab and throw opponents away. When the goal is only accessible via an moving platform where all four players are stuck on, there will definitely be chaos as players jockey for the best position. 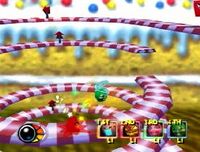 Don't get confused by the circular path, the objective is still trying to go up to a higher platform.

Iggy's Reckin' Balls can be considered to be a puzzle oriented racing game, but many players also consider it to be the spirital successor to Uniracers because of many shared game mechanics.

Intense 4-player race to the top.

Iggy's Reckin' Balls is actually the smallest game ever made for the Nintendo 64. It's small 32 Megabit Cartridge translates to roughly 4 Megabytes of total game data, which is quite impressive compared to other games of this type and calibur at the time.