Ike is the name of the main character in the 9th and 10th games of the Fire Emblem series, called Fire Emblem: Path of Radiance for the Nintendo GameCube and Fire Emblem: Radiant Dawn for the Wii, both of which are Strategy RPGs. Ike is a swordsman, who's initial class is Ranger. His father is Greil, the commander of a group of mercenaries-for-hire. (The Greil Mercenaries) Ike's only sibling is his younger sister, Mist. He works to become a great fighter and attempt to live up to his Father's legacy.

In terms of personality, Ike tends to be very honorable, though inexperienced and relatively naive about the customs and cultures of other nations. He is also known for being bluntly honest with others, which causes some to label him as being rude. He becomes a strong leader, though still relying on the advice of long time members of the company, Soren and Titania.

Like Marth, he follows the not-so-strict tradition of being another blue haired hero. He is also the first Fire Emblem main character who is not of Royal Blood.

After his father is mortally wounded and killed by The Black Knight of Daein, Ike is given command of the Mercenary company, which he strives to lead as well as Greil did. Ike was born in Gallia, among the beast-like Laguz, before moving to Crimea at a very young age. Because of this, Ike does not remember Gallia, and didn't even know the Laguz existed before he was forced to flee Crimea. 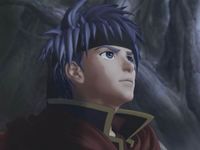 A close up from an FMV from FE9 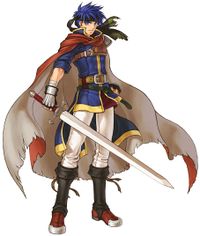