Impa is a recurring character in the Legend of Zelda series. 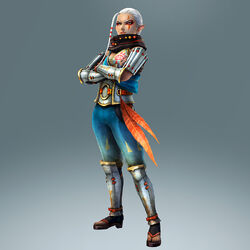 Impa was born and raised in Kakariko Village. She became an attendant to the young princess Zelda, and left her village to live in Hyrule Castle.

She plays a very important role in the beginning of the game: she teaches Link the song "Zelda's Lullaby" and teleports him to safety outside the castle. She explains the importance of collecting the spiritual stones, and that the next one is located somewhere in Death Mountain.

During Link's hunt for the Spiritual Stones, Hyrule Castle is attacked by Ganondorf. As the storm reaches it's peak, Impa & Zelda flee from the Castle on horseback, being followed closely by Ganondorf.

When Link returns to Kakariko Village as an adult, Sheik tells him that Impa went into the Shadow Temple to defeat an old, unearthed evil (Bongo-Bongo) that plagued the village long ago. Once Link defeats Bongo-Bongo, Impa reveals herself as the Sage of Shadows, and hands the Shadow Medallion to Link.

Impa was confirmed to be a playable character in Hyrule Warriors. Not much else is known.