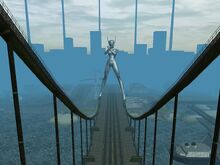 One of the many heroines to give her life for truth, justice, and the American way.

Independence Port is one of the most important zones in Paragon City commerce, while some shipping goes to the Talos or Peregrine Islands, most comes to Independence Port. This also makes it the primary place to find the Family, with their interest in smuggling drugs and other illegal items. This has pulled in the Tsoo, who are fighting a minor gang war with the mafia. The Council, as usual, has set up recruiters throughout the zone, and you may find other groups looking for business or territory. Independence Port is also the home of Lusca, a giant squid which attacks fairly regularly until beaten back by heroes. The Ghost Ship, also seen in Talos Island, also appears here from time to time.

Historically, Independence Port is known as the site of the 5th Column attack on December 7, 1941. The giant hero Atlas almost single-handedly stopped them on the Valor Bridge, although he lost his own life in the process. Independence Port is also the only zone to contain another entire zone within it, with the industrial island of Terra Volta.