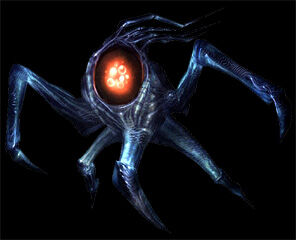 Bad dudes. The Ing are aliens that come in many different forms, usually with one big glowing eye. They have the ability to turn into oil-like puddles that make them harder to follow and harder to kill for Samus Aran. They are also capable of possessing other creatures and making them "dark", giving them stronger defense and sometimes new abilities.

They originated on Dark Aether, a dark copy of Aether, homeworld of the Luminoth. A meteor impacted Aether, splitting the planet into two dimensions. The result was a gigantic war between the Ing and the Luminoth, with the Ing winning. Samus was asked by a Sentinel of the Luminoth to defeat the Ing and their leader, the Emperor Ing.

All Ing are weak to Light Beam shots.