Iris Online was a gypsy-themed fantasy MMORPG developed by Eyasoft, makers of Luna Plus and Titan Online and published by Gala-Net, publishers of worldwide sensational MMORPGs such as Flyff and Rappelz. With over 1000 quests, 22 themed instance dungeons, and an intricate Tarot Card system, Iris Online is a full feature MMORPG rich in both PvE and PvP action. The cute anime-pop graphics and gorgeously realized 3D environments make Iris unique, with a look and feel all its own.

There are currently three races in the Iris Online Universe. Each race are relatively unique and comes with their own set of race-specific class. When choosing which race you should be playing, one must consider their class preference carefully. Even though some classes might seem similar at first glance (Elf's Scout and Hybrid's Hunter for example), Their skillset and average stat progression is unique enough to alter your preferred attack pattern and overall gameplay.

Human is one of the most versatile race out there. They can focus their talent in both melee and magic. While their stat tends to average out more than both Hybrid and Elf, Human excels in their class versatility. Want to master the world of melee combat? Want to take the brunt of enemy attack for your party and unleash multiple buffs? Want to snipe adversaries with magic? Want to help your party as a healer? This race is your answer. If you fancy variation and wider spell options, human is your best friend.

Hybrid race hits and hits HARD. These beastmen (and women) has an advantage in physical prowess but not so much in their intelligence department. While not as versatile as Human, their class branching and skill options provides wide varieties of gameplay mechanics focused solely on physical damage. From tank to ranged attacker, from heavy melee to agility-based dual wielding. If you want to excel in physical damage department, Hybrid is your race of choice.

Elf is close enough to match the profile of a glass sword. They can dish great damage both physically and magically, but their defense can be rather lacking. However, don't let their seemingly lower defense fools you. These agile pointy ears can outmatch most enemy with their variety of buff/debuff and damage dealing skills. Playing as an elf, especially soloing, can be more challenging compares to the other races at times, but once you found your perfect skill combo, your character can outshine most opponents out there, be it PvE or PvP.

Through Iris's mysterious Divination System, players can get their Tarot Cards read from a fortune-telling NPC. Let the Fortune Teller reveal the secrets of the mystic arts, and your character may receive buffs and other special boosts in exchange. Players can also morph instantly into monsters by using a collected Monster Card. Turn into a bouncy and resistant toadstool or a super powerful end-game boss, all with the flip of a card!

The Fool, The Chariot, and Wheel of Fortune, are included amongst the 22 Major Arcana Tarot Cards to lend its theme to each of the 22 dungeons. The Lovers Dungeon, for example, can only be entered by a male + female pair, both of whom have already added The Lovers Card to his and her Tarot Collection. In order to successfully complete this raid, both players must survive, because if one falls, then both fail.

In addition to truly distinct dungeon instances, Iris also boasts some of the most unique mounts in any MMO. From clown cats and rainbow colored ostriches to accordion-legged toy horses, getting around with up to 50% increased speed has never looked so good!

Iris's full feature set also includes a beautifully organized UI to display information in a stunningly simple yet comprehensively informational interface. Additionally, for those players who want to keep their finger on the pulse of their social network, Twitter has been fully integrated into the player dashboard without the use of any add-ons. 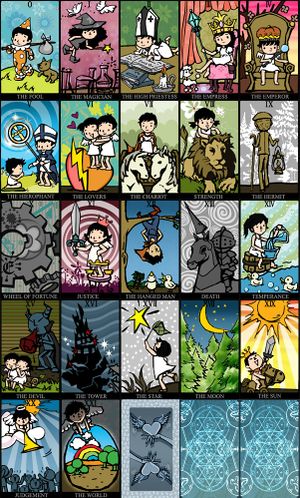 Iris Online consists of 22 Major Cards and 56 Minor Cards! Collect all Tarot Cards for unlimited variations and endless expansions! Customize your character with unique weapons and perfect your battle styles! Utilize the cards in all aspects of the game, including Materializing, Attachment, Carving, and Summoning. 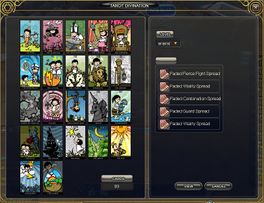 The Tarot Store is The way you can get buff from reading your future with the Major Tarot Cards.

To make this possible you need to collect the 22 Major Tarot Cards in your Collector Book, this can be obtained by killing monsters or just buying them at Tobias in Terminus. Then you need to have at Least 1 Spread, you can get them from Tobias too or from monsters, and you need to have one Fairy Powder, that can be dropped by killing several monsters in the game. If you got everything then open the Skill menu and use the "open fortune telling house" skill. Then you only need to click "View", chose your spread and ten cards to open. You can speed up with the "random" button.

The chosen cards will be arranged and you have to chose how you want to flip them. You can speed up that again with three buttons on the right side.

After finishing and accepting, you'll receive a 2 hour lasting buff depending on the outcome of the tarot and the spread you chose. This could be a pair of wings, or a weather effect. Don't worry, you don't lose any of your Tarot cards or spreads, but you do lose fairy powder.

In later levels you'll drop *Silver Tarot cards and you can buy random Silver Tarot Cards from Tobias. If you also got that set full and got a silver spread you can even receive stronger buffs, but remember that the buffs will only last for a good little while, so make it count!