Iron Grip: Warlord is the first commercial release from independent strategy game developer ISOTX. It is a first-person shooter, combined with many real-time strategy elements, offering the gamer a degree of Violent Relaxation. It uses the id Tech 3 game engine and is set in the fictional universe of Iron Grip. Read more about other ISOTX games on the ISOTX Wiki! 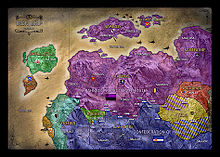 Map of Kathos, showing the countries residing on the continent.

Set in the dieselpunk genre, the world of Iron Grip; Warlords shares many socio-political themes of the Naploionic era. Blended together with the ever-advancing technological age of World War II. The Iron Grip world is home to many different landmasses, but Warlord focuses on Kathos, a frigid region to the northeast similar to Eastern Europe. Kathos is divided into two large military powers as well as a handful of neutral countries. To the north lies the Sovereign Republic of Rahmos, possessing the world's greatest airship fleet and a superior, technologically advanced military. Their territory includes a number of client states in addition to their home island. The country of Fahrong (known as the Confederation of Nallum), is the other major power. Dominated by mountainous terrain, the Confederates employ colossal mechanized walkers known as 'Arachs' along with the largest standing army known to man. Central to the game is Atelia, a medium-sized country known for being rich in raw materials and other resources. It is a hub for all number of ethnic and tribal groups. At the time of the game, Atelia is a country traditionally divided into city-states and nomads. Its lands are continually at the mercy of the two great Kathosian powers. The scraps of the country, are ruled over by Warlords.

You enter the war game as one of the savagely independent Atelia warriors of Warlord Sahrab's army. Atelia has been invaded by the Confederation, which has paved the way for its invasion by sending in missionaries, charged with converting the Atelians to the Fahrong cause. Atelia itself cannot be described as politically sound nation. Years of unrest have produced a fractured, anarchic country, with divided loyalties. It was Warlord Sahrab who realized that this large-scale invasion cannot be resisted until the whole of Atelia unites, and so he takes up arms in deadly guerrilla warfare, designed to provoke the Confederation into bombarding entire cities. As a Warlord, you must use all of your skill to defend the city down to the last man, against the Confederate attacks. In an innovative blend of RTS and FPS genre's, advancing the "Art of Defense" gameplay, you will employ urban guerrilla tactics to fend off the hordes. You must protect your city at all costs, by building defensive structures, setting traps, and taking the enemy on, the fate of Atelia rests with you.

The warring factions in the war game are the Atelian Militia and the Confederation of Nallum. The Atelians are making their last stand in the city-states which the Confederates strive to take control of no matter what the cost may be.

The Atelian Militia is a combination of loyal armed citizens, organized resistance and deadly allied nomadic warriors. Their primary objective is to slow the march of the Confederate armies by any means, while reducing their public support and encouraging Atelian civilian to take up arms with the resistance.

The Confederation consists of modern armies boasting millions of highly trained troops. Who are a force to be reckoned with, when combined with the unlimited resources that are at the Confederations disposal.

Gameplay centres on fending off large invading armies with a comparatively small elite group in an urban setting. Players must deploy defences via an overhead construction interface, ensuring their stronghold survives wave after wave of AI-controlled enemy battalions without being overwhelmed. This scale of battle is achieved by combining real-time strategy construction with first-person combat to create the ultimate defence game. What makes Iron Grip: Warlord unique is that its offers the player equal opportunity to experience first-person shooting and real-time strategy. It uses a variety of weapons ranging from the mass produced musket, to fierce flamethrowers and heavy machine guns.

Iron Grip: Warlord is available through an independent distribution platform at ISOTX's online web-store. It is also available on , Valve's Steam,  GamersGate, and Impulse digital distribution platform. On December 22, 2008, ISOTX released a major update, marketed as a "free expansion" entitled ‘The Winter Offensive’. It contains new units, a new level, as well as fixes. A demo has been released, which offers the player one map, on skirmish, LAN or on the internet.

The strategy game is developed by ISOTX, previously known for their “MidEast Crisis” mod for C&C Generals and Iron Grip: The Oppression, a total conversion mod for Half-Life 2 (HL2). Both are still available on the developers' site at www.isotx.com. A sequel to the MidEast Crisis mod, MidEast Crisis 2, has been developed for "Command & Conquer 3: Tiberium Wars". ISOTX are currently developing the free to play strategy game Iron Grip: Marauders.

Iron Grip: Warlord was released to generally mixed reviews, currently holding an aggregate score of 59% based on 4 reviews at Metacritic. IGN awarded the game a 4.5/10,[1] with the headline "Lay down your weapons – this one's not worth fighting for." Much of the criticism from IGN revolved around the game's execution. Particularly the lack of balance in the RTS mode, as well as the AI unsatisfactory pathfinding.

Smaller resources, like ‘Games Abyss’, found the game much more to their liking, offering praise for the unique concept and the execution from an independent gaming company's first commercial title. Andreas Asimakis of Games Abyss writes,[2] “If Iron Grip: Warlord is any indication, Isotx should be considered a creative force to be reckoned with. Delivering the best aspects of first person shooters and blending the experience with RTS elements has made for an amazing combination. Iron Grip is nothing but simple fun and players wanting a distraction from those prettier and more expensive titles should make it a point to purchase Iron Grip.”

Similar praise and commentary came from ‘Gamers Daily News’, which rated the game with a 9.0 overall.[3] “The Iron Grip series may bring about some change in the gaming community that, for the better, will introduce a new type of game that caters, not only to the people who want to run and gun, but to those gamers who want something with a little more meat than your average first person shooter.” Even Destructoid, who offered an otherwise critical review, was much more forgiving than IGN. “… if you can get a group of people together you know to play with, I really do think this game is worth the $25 they’re selling it for. It’s not perfect, but the first commercial game from an indie developer rarely is. Isotx has shown a ton of promise, and is definitely a company to be looking out for in the future,” said Jonathan Ross.[1] The game now sells for $8 on Steam, with the Scorched Earth DLC available for $3. Both together are available for $9.