Iron Man, along other Avengers, attempt to stop the Red Skull. Iron Man can fly and fires lasers.

Iron Man, Captain America, Spider-Man, Wolverine, and Hulk are called by Adam Warlock to search for the Infinity Gems around the globe and stop Thanos. Doppelgängers of Iron Man appear as enemies and bosses.

Iron Man is one of the last characters used by the player in the story. He defeats aliens at the Avengers Mansion and manages to escape, going to the power plant. There he finds Brigade and defeats him. After going out the power plant, an infected Human Torch faces him. Iron Man defeats him and heads back for the Avengers Mansion. There he finds Roekel in a deadly alien suit and is defeated by him.

Iron Man is a playable character. He is one of the heroes that fight against the Masters of Evil led by Doctor Doom. His building is used as the headquarters for the heroes. 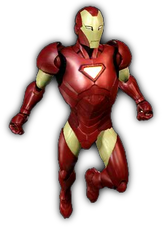 He let Stark Tower for a base.

He don't let the super villains to be free or give the heroes secret.

Tony is in a anti-registration. So is Mr. Fantastic, Songbird, War Machine, Bishop, She-Hulk, Wonder Man and Yellowjacket. Some of the team join too. Spider-Man, Iceman, Hulk, Thor, Ms. Marvel, Deadpool, Gambit, Human Torch, Invisible Woman, Thing, and Penance. Patriot attack the base, and in jail.

Tony plan to attack Cap base. He, Bishop, Black Widow, War Machine and the others attack the base. The put Cable, Spider-Woman, and Hercules are in jail. Tony try to put cells into the villains. He got Venom, Lady Deathstrike, and Molten Man.

He take the prisoners to jail but Cap, Firestar, Goliath and Prodigy attack them to free the friends. Tony use the three villains to attack. And Songbird and Yellowjacket to help too. Cap has free the other, but not Spider-Woman. He free a villain named Multiple Man.

Iron Man appears as a boss.