Ivysaur or フシギソウ in Japanese is one of the original 150 Pokémon that first appeared in Pokémon Red and Blue. It evolves from the starter Pokémon Bulbasaur, making it one of the more familiar and better-known Pokémon of the series. Its name comes from the word ivy and, curiously, the word-ending -saur, despite Ivysaur's resemblance to a frog rather than a lizard. Ivysaur can be considered an adolescent stage of the Bulbasaur evolutions, as it grows in size and the bulb on its back begins to open. Evolving from a Bulbasaur, an Ivysaur is still squat, but somewhat larger, and develops more prominent canine teeth. What was once a bulb on its back in its earlier development has now grown into a large flower bud.

Ivysaur is a playable character in Super Smash Bros. Brawl when under the use of the "Pokemon Trainer" character.

The only way to obtain an Ivysaur in all Pokémon games (besides trading) is to evolve a Bulbasaur, whether Bulbasaur are available in that game or not.

In the first-generation Pokémon games, the player may choose Bulbasaur, Charmander or Squirtle as his or her first (or "Starter") Pokémon. If the player chooses a Bulbasaur, the protagonist’s rival will choose a Charmander,[1] since Charmander has a type advantage over Bulbasaur.[2] Ivysaur are not found in the wild, and can only be obtained by evolving a Bulbasaur by leveling it up to level 16.[3] The three original starters are not available in any of the other games in the series, except in the enhanced remakes, FireRed and LeafGreen. However, in Pokémon Yellow, a Bulbasaur becomes available later, as a gift from a non-player character in Cerulean City, following the Pokémon anime storyline.[4] Since Ivysaur can only be obtained by evolving a Bulbasaur,[3] at level 16 the availability of a Bulbasaur dictates the availability of Ivysaur. Furthermore, Ivysaur evolves into Venusaur at level 32.

The Pokémon anime series and films are a meta-series of adventures separate from the canon that most of the Pokémon video games follow (with the exception of Pokémon Yellow, a game based on the anime storyline). The anime follows the quest of the main character, Ash Ketchum[5]—an in-training Pokémon Master—as he and May (as well as several other companions[5]) travel around the fictitious world of Pokémon along with their Pokémon partners, Pikachu and Blaziken.[6]

A group of newly evolved Ivysaur appeared in Episode 51, "Bulbasaur’s Mysterious Garden", in which the group stumbled upon a natural evolutionary ground for Bulbasaur, under the protection of a Venusaur, where they witnessed a natural cycle of many Bulbasaur evolving into Ivysaur, and defended his Bulbasaur’s right to not evolve.[7]

Another Ivysaur was owned by a minor character, Jimmy, an in-training Pokémon battle referee who also owned a Charmeleon and a Wartortle, in Episode 368, "Judgment Day", in which the group accidentally travel to Banaba island, where there is a camp dedicated to training referees. Jimmy's tutor, Sarina, asks Ash and Brock to have a double battle, so Jimmy could practice refereeing. Ash's Swellow attacks Brock's Pokémon hard, and Brock tells Lombre to play fainted. Jimmy is about to rule Lombre unable to battle, at which point Sarina interrupted and told Jimmy he should watch the battle more closely and that Lombre is still able to continue to fight. Later that evening, the group ask Jimmy how he caught all of his Pokémon. Jimmy explains that he started out in Kanto with a Squirtle, which evolved into a Wartotle on his journey. He explains that one day, he and Wartortle were fighting over who would eat a rice ball, and accidentally knocked it down a hill, and rolled into a yawning Ivysaur's mouth. Ivysaur felt sorry for Jimmy and Wartortle and decided to join their team. As for Charmeleon, Jimmy explains that he once accidentally caught a shiny gold Magikarp while fishing, and a man who walked by offered to trade his Charmeleon for it, which Jimmy accepted.[8]

Another Ivysaur was owned by a girl, Crystal, in the Pokémon Chronicles series, a collection of sub stories separate from the main anime series. In Episode 16, "Put the Air Back in Aerodactyl!", Professor Oak, and his assistant Tracey, visit Oak's nephew, Gary Oak, on Saida Island, where Gary has secretly cloned Aerodactyl, an extinct Pokémon. However, when Professor Oak and Tracey arrive, Aerodactyl has escaped from the lab, and is roaming the island. Kobara, a female researcher, has a little sister, Misawo, who controlled groups of wild Pokémon to help the group find Aerodactyl. Misawo uses her Ivysaur to defeat Team Rocket agents, Butch and Cassidy, and save Aerodactyl.[9] 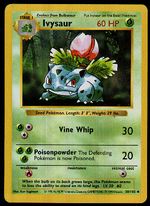 Ivysaur in the Pokémon Trading Card Game (Base Set).

The Pokémon Trading Card Game is a collectible card game similar in goal to a Pokémon battle in the video game series; players must use cards (with individual strengths and weaknesses) in an attempt to defeat their opponent by "knocking out" all of his cards.[10] The game was first published in North America by Wizards of the Coast in 1999, until Nintendo USA started publishing the series in 2003.[11]

Most Ivysaur cards are typical, Stage-1 Pokémon cards, and are primarily used to play stronger cards (such as Stage-2 Pokémon, like Charizard).[12] Ivysaur appear in the Base set (as well as the Base Set 2 and Legendary Collection), the Gym Challenge set (as Erika's Ivysaur), the Expedition set, and the EX FireRed & LeafGreen set, as well as appearing in the promotional Southern Islands set.[13]

Red received a Bulbasaur, which he nicknamed "Saur", in the Pokémon Adventures manga, and manga based on the original games, from Professor Oak, in Chapter 1, "VS. Mew".[14] It battled alongside Red, until Chapter 15, "Wartortle Wars", when it evolved into an Ivysaur, after battling a wild Mankey.[15] In Chapter 30, "Zap, Zap, Zapdos!", Red used his Suar to defeat Lt. Surge's Zapdos, using its Razor Leaf attack to cut the cables that joined the Team Rocket Executive and the legendary bird.[16] In Chapter 33, "The Winged Legends", Red's Ivysaur evolved into a Venusaur to team up with Blue's Charizard and Green's Blastoise, Turtley, to defeat Sabrina's Zapmolcuno (a merged form of Zapdos, Moltres and Articuno) and destroy Team Rocket's control on Saffron City, splitting the three birds in the process.[17]

Red's Saur re-appeared next in Chapter 40, "A Charizard... and a Champion", during the final match of the Ninth Pokémon League, against his longtime Rival, Blue. The battle began with Red's Saur and Blue's Charizard facing each other, Charizard tried to use Fire Punch, but was hit by Saur's Poison Powder nearly being knocked out, despite the type advantage. As the battle progressed, Blue's Ninetails used Fire Blast to send Red's Pikachu, Pika, and Poliwrath, Poli, flying towards the ceiling. The two trainers then use their first Pokémon to battle again, Saur binding the Charizard from attacking. Suddenly, thunderclouds began to form above the battlefield, formed from the attacks of Poli and Pika, and Saur submerged a vine into the cloud, shocking Charizard and knocking it out.[18]