He sues game makers, their costs go up, game prices go up. Where is this guy's money coming from? You.

John Bruce “Jack” Thompson (born July 25, 1951) is a disbarred Miami lawyer who has in the past few years decided to pay his bills by taking advantage of the growing video game industry.

For as much of his career as anyone seems to know, Jack Thompson has been an ambulance chaser of the highest order, going after cases with as much publicity as possible. In the proceedings for Bill Clinton's impeachment, Thompson wanted to file suit against congress for not convicting the president. When he lost to Janet Reno for State Attorney, he shot out accusations that she was a lesbian, had mental disorders, and was being bought out by the Mafia. Good sport, that Jack is.

Thompson is well known for filing suit against as many large companies as he can find attached to a violent incident, where the victim's family all too easily believes his theories about video games being the real reason behind the killing. He will sue not only retailers like Wal-Mart and Best Buy, not only the game designers and publishers like Rockstar Games and Take Two Interactive, but also anyone who he thinks facilitated the game in any way, like Sony.

He commented on the 2002 Washington, DC sniper incident, saying video games were the inspiration for the attacker, and claiming his "I am God" messages to police as a reference to a "God mode" cheat.

He also once performed a "sting" operation in a Miami Best Buy, videotaping a ten-year-old child he presumably hired in the act of purchasing a copy of Grand Theft Auto: Vice City - Thompson proceeded to threaten Best Buy with a massive suit, and attempted to implicate Sony and Take Two in the same event.

Choice quotes from Thompson include "We are going to destroy Rockstar, you can count on that," "Doug Lowenstein [head of the ESA] makes Saddam Hussein look like a post-reformed Pinocchio," and "They [the video game industry] are about to pay a wicked price, and I aim to make sure they pay it."

One of his most famous cases was that of a murder in the United Kingdom in 2004, in which he cited Manhunt as an inspiration and perhaps motivation of the killer due to the murderer's attack method. Funnily enough, a copy of the game was found in the victim's apartment, but not in the killer's.

Luckily for us, almost every one of Jack Thompson's cases has been met with sighs and eye-rolls. Most have been summarily dismissed.

Jack Thompson's website is StopKill.com. This is almost too easy to make fun of.

Mr. Thompson has also been permanently disbarred from Florida.

Beginning in 2005, Thompson supported a campaign to discourage Rockstar Games, from releasing Bully, a game in which, according to Thompson, “what you are in effect doing is rehearsing your physical revenge and violence against those whom you have been victimized by. And then you, like Klebold and Harris in Columbine, become the ultimate bully.” According to Thompson, the game "shows you how to — by bullying — take over your school. You punch people; you hit them with sling shots; you dunk their heads in dirty toilets. There's white-on-black crime in the game. You bludgeon teachers and classmates with bats. It's absolutely nuts."

Thompson sued Wal-Mart, Best Buy, Target, Circuit City, GameStop and Toys ‘R’ Us, seeking an order to bar the game’s release and participated in a protest with students from Peaceaholics at the Rockstar’s office. In March 2006, a Florida school board he had lobbied passed a resolution criticizing the game, but only urged retailers not to sell the game to minors.

Thompson also criticized Bill Gates and Microsoft for contracting with Rockstar Games to release the game on the Xbox. The Xbox version has since been cancelled for undisclosed reasons. In August 2006, Thompson requested a congressional subpoena for an early copy, threatening to file suit in Miami if he did not gain help from U.S. Rep. Cliff Stearns. Once the game is out, according to Thompson, "the horse will be out of the barn and it will be too late to do anything about it." Thompson argued that it violated Florida's public nuisance laws, which prohibit activities that can injure the health of the community.

Rockstar Games co-founder Terry Donavan responded, saying "I would prefer it if we could simply make great games and not have to deal with misunderstanding and misperception of what we do." After receiving no response from Rockstar regarding an advance copy, Thompson filed the public nuisance complaint against Wal-Mart, Take Two, and GameStop, demanding that he be allowed to preview the game before its October 17 release date. Take Two offered to bring in a copy and let both the judge and Thompson view the game in the judge's chambers on October 12, 2006. The judge ultimately saw no reason to restrict sales and dismissed the complaint the next day.

Thompson was critical of the judge's decision, telling the judge "You did not see the game... You don't even know what it was you saw," as well as accusing the Take Two employee who demonstrated the game of avoiding the most violent parts. Blank Rome subsequently filed a motion to have Thompson's behavior declared "contempt for the court". Judge Friedman then recused himself from ruling, and instead filed a complaint against Thompson with the Florida Bar, calling Thompson's behavior "inappropriate by a member of the bar, unprofessional and contemptible".

Thompson later drew attention to the game's main character, a 15-year old male, being able to kiss other boys. Thompson wrote to ESRB president Patricia Vance, "We just found gay sexual content in Bully as Jimmy Hopkins makes out with another male student. Good luck with your 'Teen' rating now." The ESRB indicated that they knew the content was in the game when they rated the game. 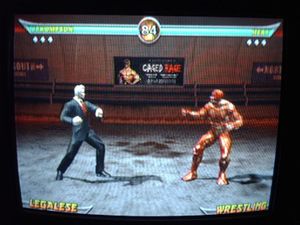 In October 2006, Thompson sent a letter to Midway Games, demanding they cease and desist selling the latest game in the Mortal Kombat series, Mortal Kombat: Armageddon, claiming that the game was illegally profiting on his likeness, as there was featured a "Jack Thompson" character. In reality, he created using the Kreate a Fighter feature. Midway has not ceased distribution of the game.

This is the Kreate a Fighter formula to create Jack Thompson.

On July 31, 2005 Jack Thompson did an interview with ChatterBox radio about his stances and various views on the video games he has for so long fought against. Over an hour long, the interview delves deep into his logic and hate for certain aspects of the video gaming industry.