I am your father.

James was last seen when he was betrayed on Venom by Pigma. His whereabouts are unknown. Part of Fox's motivation for roaming the Lylat system, aside from peacekeeping, is finding his father.

It is generally accepted that he is dead, although in Star Fox 64, during the "complete" ending, he appears and saves Fox & the others from a fiery death. Afterwards, he disappears, implying that Fox was simply visited and assisted by a ghost. James McCloud also has a brief cameo in Star Fox: Assault, though this is quickly revealed to be a mind game created by the Aparoid queen. 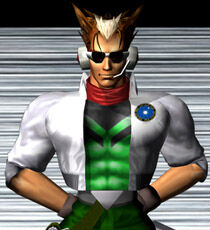 I am a reference to your father.

James McCloud is also a character in F-Zero GX. He is obviously inspired by the Star Fox character, and races in a craft that resembles an Arwing. In F-Zero GX, he wears exactly the same clothes as the Star Fox character, but is human, with a Fox Ear-like hairstyle. His character bio states that he leads a space combat team known as the "Galaxy Dogs" and races to support his wife and son.