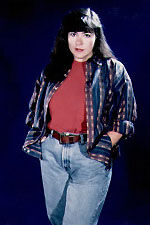 Jane Jensen is the game designer of the popular and critically-acclaimed Gabriel Knight adventure games, and an author of the novels Judgement Day and Dante's Equation, which was nominated for the Philip K. Dick Award in 2003.

Jane Jensen was born Jane Elizabeth Smith in 1963 in Palmerton, Pennsylvania, USA. She received a BA in Computer Science from Anderson University in Indiana and worked as a systems programmer for Hewlett-Packard. Her love of writing eventually led her into the computer gaming community where Jane established her reputation with Gabriel Knight. The Gabriel Knight PC games are supernatural mysteries done in an adventure game style and are some of the most story-intensive games ever developed. All three Gabriel Knight titles won industry awards.

In 1996, she published the first of her two novelizations of the Gabriel Knight games. In 1999, her first original novel, Millennium Rising, was published in hard cover and was also released as an audiobook and mass market paperback (retitled Judgment Day). Her fourth book, Dante's Equation was published in 2003.