Japan is a country in Asia that has had a profound impact on video gaming history. Its capital is Tokyo, and the country itself is home to a number of companies and corporations related to gaming and video gaming, such as Sony Corporation, Konami, and Nintendo.

Japan has made numerous contributions to video games. See the articles above for further information.

The following are examples of Japanese contributions to various technologies related to gaming, including computing, graphics, audio, memory/storage, and related electronics.

Digital Control Bus (DCB) and DIN sync
In 1980, Roland introduced the Digital Control Bus (DCB) communications protocol, using the DIN sync interface to synchronize different electronic musical instrument. It was introduced with the Roland TR-808 in 1980, considered groundbreaking at the time, followed by other Roland equipment in 1981. It was the precursor to MIDI, which adopted most of its features from the DCB protocol, including the same type of connectors as the DIN sync interface.[1][2]

MIDI (Musical Instrument Digital Interface)
In 1981, Roland founder Ikutaro Kakehashi proposed the concept of standardization to Oberheim Electronics and Sequential Circuits, and they then discussed it with Yamaha, Korg and Kawai.[14] A common MIDI standard was developed, working with Roland's pre-existing DCB as a basis,[1] by Roland, Yamaha, Korg, Kawai, and Sequential Circuits.[14][15] MIDI was publicly announced in 1982.[16] MIDI allowed communication between different instruments and general-purpose computer to play a role in music production.[17] Since its introduction, MIDI has remained the musical instrument industry standard interface through to the present day.[18] Kakehashi received the 2013 Technical Grammy Award for the invention of MIDI.[19][20]

MIDI sound card
The spread of MIDI on computers was facilitated by Roland Corporation's MPU-401, released in 1984. It was the first MIDI-equipped PC sound card, capable of MIDI sound processing[27] and sequencing.[28][29] After Roland sold MPU sound chips to other sound card manufacturers,[27] it established a universal standard MIDI-to-PC interface.[30] The widespread adoption of MIDI led to computer-based MIDI software being developed.[17]

Music Macro Language
In 1978, Japanese personal computers such as the Sharp MZ and Hitachi Basic Master were capable of digital synthesis, which were sequenced using Music Macro Language (MML).[31] This was used to produce chiptune video game music.[21] 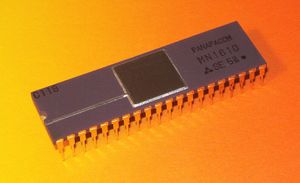 FM synthesis computer music
The Yamaha GS-1, the first commercial FM digital synthesizer, released in 1980, was programmed using a proprietary Yamaha computer, which at the time was only available at Yamaha's headquarters in Japan (Hamamatsu) and the United States (Buena Park).[43] In 1983, Yamaha modules introduced FM synthesis to the MSX personal computer.[22][23]

Microprocessor
The concept of a single-chip microprocessor central processing unit (CPU) was conceived in a 1968 meeting in Japan between Sharp engineer Sasaki Tadashi Sasaki and a software engineering researcher from Nara Women's College. Sasaki discussed the microprocessor concept with Busicom and Intel in 1968.[56] The first commercial microprocessor, the 4-bit 4004 Intel 4004, began with the "Busicom Project"[57] in 1968 as Masatoshi Shima's three-chip CPU design,[58][57] which was simplified down to a single-chip microprocessor, designed from 1969 to 1970 by Intel's Marcian Hoff and Federico Faggin and Busicom's Masatoshi Shima, and commercially released in 1971.[57][59]

Touchpad tablet
The first touchpad tablet was invented in 1971, by Hidekazu Terai and Kazuo Nakata at Hitachi's Central Research Laboratory. It used a data tablet as a touchpad, with Japanese writing character recognition, for use with a computer.[73] Touch-based tablet input later appeared in the Japanese electronic word processor industry in the 1970s.[74] In 1976, Sharp's Takeo Hara, Takeshi Kasufuchi and Ko Ozawa invented an electrode-based touch input device, using electrode technology,[75] which was improved by Sharp's Hisao Komori and Makoto Shigeta in 1977, using electro-optical technology.[76] Sharp commercially introduced it with its Shoin WD-3000 word processor, released in 1979. It had touch-based tablet input, with a touch-pen used for entry.[77][74] This touch-based interface soon appeared in most Japanese word processors released from 1980 to 1982. A reason for this was because of the complexity of the Japanese writing system, with touch-based entry allowing typists to type faster. As better Japanese input methods developed for keyboards in the early 1980s, however, the Japanese word processor industry soon reverted back to keyboard entry.[74]

Touchscreen tablet
In 1979, the first touchscreen tablet was invented by a Japanese team at Hitachi consisting of Masao Hotta, Yoshikazu Miyamoto, Norio Yokozawa, and Yoshimitsu Oshima, who received a US patent for their invention.[78]

USB
A group of several companies began the development of USB in 1994, including Japanese company NEC.[83]

Aperture grille
One of two major cathode ray tube (CRT) display technologies, along with the older shadow mask. Aperture grille was introduced by Sony with their Trinitron television in 1968.[84]

Color LCD projector, and 3LCD
Epson developed the 3LCD color projection technology in the 1980s, and licensed it for use in projectors in 1988.[89] The first color LCD video projector were Epson's 3LCD-based VPJ-700, released in January 1989,[50] and an LCD color video projector released by Sharp Corporation in 1989.[90] Epson's 3LCD technology went on to be adopted by about 40 different projector brands worldwide.[89]

Handheld television
In 1970, Panasonic released the first television that was small enough to fit in a large pocket, the Panasonic IC TV MODEL TR-001. It featured a 1.5-inch display, along with a 1.5-inch speaker.[96]

High definition television (HDTV), and digital television
Japan had the earliest working HDTV system, with design efforts going back to the 1970s. Japanese consumer electronics firms forged ahead with the development of HDTV technology, with the MUSE format proposed by NHK, a Japanese company. MUSE, the development of which began in the 1970s,[97] was a hybrid system with analog and digital features.[98] Until 1990, the Japanese MUSE standard was the front-runner among the more than 23 different technical concepts under consideration.

TFT LCD
LCD displays incorporating thin film and transistors were demonstrated in 1970 by J. Kishimoto from Canon[106] and Katsumi Yamamura from Suwa Seikosha (Seiko),[107] and further developed by Sharp Corporation in 1976.[108] In 1977, a TFT (thin-film transistor) LCD display was demonstrated by a Sharp team consisting of Kohei Kishi, Hirosaku Nonomura, Keiichiro Shimizu and Tomio Wada.[109] In 1980, Hattori Seiko's R&D group began development on color pocket LCD television, which led to the release of the first commercial TFT LCD displays by three of its subsidiaries.[87] One of its subsidiaries, Citizen Watch, introduced the Citizen Pocket TV, a color TFT LCD handheld television,[87][110] with a 2.7-inch display, in 1984.[110] By 1985, two other Seiko Hattori subsidiaries had also introduced TFT LCD handheld televisions, with Seiko's color micro-TV and the Epson ELF.[87]

Widescreen
Widescreen televisions date back to the 1970s, when Japan's NHK introduced the Multiple sub-Nyquist sampling encoding|MUSE high-definition television system, which was soon backed by Sony and other Japanese television manufacturers.[97]

Blue laser
In 1992, Japanese inventor Shuji Nakamura invented the first efficient blue LED.[113] Nakamura invented it with Isamu Akasaki and Hiroshi Amano, for which the three of them were awarded the 2014 Nobel Prize in Physics.[114]

Continuous wave semiconductor laser
Invented by Izuo Hayashi and Morton B. Panish in 1970. This led directly to the light sources in fiber-optic communication, laser printer, barcode readers, and optical disc drives, technologies that were commercialized by Japanese entrepreneurs.[62]

JFET (junction gate field-effect transistor)
The first type of JFET was the static induction transistor (SIT), invented by Japanese engineers Jun-ichi Nishizawa and Y. Watanabe in 1950. The SIT is a type of JFET with a short channel length.[117]

PIN diode/photodiode
Invented by Jun-ichi Nishizawa and his colleagues in 1950.[118]

Real-time 3D ray tracing
The first implementation of a real-time 3D ray-tracer was the LINKS-1 Computer Graphics System, built in 1982 at Osaka University's School of Engineering, by professors Ohmura Kouichi, Shirakawa Isao and Kawata Toru with 50 students. It was a massively parallel processing computer system with 514 microprocessor, used for rendering realistic 3D computer graphics with high-speed ray tracing. According to the Information Processing Society of Japan: "By developing a new software methodology specifically for high-speed image rendering, LINKS-1 was able to rapidly render highly realistic images." It was "used to create the world's first 3D planetarium-like video of the entire heavens that was made completely with computer graphics. The video was presented at the Fujitsu pavilion at the 1985 International Exposition in Tsukuba."[126]

CD-ROM
The CD-ROM format was developed by Japanese company Denon in 1982. It was an extension of Compact Disc Digital Audio, and adapted the format to hold any form of digital data, with a storage capacity of 553 MiB.[129] CD-ROM was then introduced by Denon and Sony at a Japanese computer show in 1984.[53]

Compact Disc (CD)
The compact disc was developed by Sony (Toshitada Doi). Sony first publicly demonstrated an optical digital audio disc in September 1976. In September 1978, they demonstrated an optical digital audio disc with a 150 minute playing time, and with specifications of 44,056 Hz sampling rate, 16-bit linear resolution, cross-interleaved error correction code, that were similar to those of the Compact Disc they introduced in 1982.[130]

Dynamic random-access memory (DRAM)
The Toshiba Toscal BC-1411 electronic calculator, which debuted in 1965,[131][132] introduced an early form of DRAM built from discrete components.[132]

Flash memory
Flash memory (both NOR and NAND types) was invented by Dr. Fujio Masuoka while working for Toshiba c. 1980.[133][134]

Holographic data storage
In 1975, Hitachi introduced a video disc system in which chrominance, luminance and sound information were encoded holographic. Each frame was recorded as a 1mm diameter hologram on a 305mm disc, while a laser beam read out the hologram from three angles.[147]

Laserdisc digital data storage
In 1984, Sony introduced a laserdisc format that could store any form of digital data, as a data storage device similar to CD-ROM, with a larger capacity of 3.28 GiB.[53]

Perpendicular recording
In 1976, Dr. Shun-ichi Iwasaki (president of the Tohoku Institute of Technology) recognized the distinct density advantages in perpendicular recording. In 1978, Dr. T. Fujiwara began an intensive research and development program at the Toshiba Corporation that eventually resulted in the perfection of floppy disk media optimized for perpendicular recording and the first magnetic digital data storage devices using the technique.[149]

Imageboard
The first imageboards were created in Japan. Later English language imageboards such as 4chan would be created.[152]