Jigglypuff is quite possibly the second most popular Pokémon character in the Pokémon series, second only to the infamous Pikachu. Thanks to the anime series, it is best known as the Pokémon that sings others to sleep, even though others can use the move "Sing" too. Jigglypuff are well known for their ability to sing a mysterious melody – containing, as is customary in all Pokémon vocalization, only the word "Jigglypuff" – that instantly puts opponents and passers-by to sleep.

The name Jigglypuff is a portmanteau of the words jiggly, referring to its motion, and puff, referring to its buoyancy. Its Japanese name, Purin, probably derives from purin (プリン, purin), the Japanese word for pudding. It may also come from a combination of many Japanese words; fukureru (膨れる, fukureru), meaning to swell or expand; fukafukashita (ふかふかした, fukafukashita?), meaning soft or fluffy; fūsen (風船, fūsen), meaning balloon; and mari (鞠, mari?), meaning ball. Essentially, it could be taken to mean "a soft and fluffy ball," "a swelling balloon," or a combination of the two

Jigglypuff is a Normal-type Balloon Pokémon. Its body is globular, pink, fluffy, cuddly, and accented with stubby appendages, a tiny tuft of a single curl of hair, and enormous blue eyes. Jigglypuff's most popular attack is to sing its opponent to sleep. Unless a Pokémon has either the Insomnia, Vital Spirit or Soundproof abilities, no one can avoid falling asleep upon hearing the song since the song's sound waves matches that of the brain waves of something that is asleep. Jigglypuff also has the strange ability to puff its body full of air to make it look larger than it actually is. Jigglypuff evolves from Igglybuff through happiness, and to Wigglytuff with the use of a Moon Stone.

Jigglypuff can easily adjust the wavelength of its voice, without pausing to take a breath. As a result, this could very well endanger its life, for if its listener does not show any (unlikely) signs of sleepiness, the Jigglypuff will continue to sing nonstop, thus using up all it's oxygen (this is highly unlikely, however, as virtually everyone who hears Jigglypuff sing falls asleep almost instantly; possibly the only Pokémon able to resist Jigglypuff's voice are Voltorb, Electrode, Mr. Mime, Whismur, Loudred, and Exploud, due to their natural ability, "soundproof," which blocks any sounds such as singing, etc.)

Jigglypuff can be obtained in all Pokémon games on the GBA and Game Boy. It is uncommon in all of them, except for Pokémon Yellow, where it's fairly easy to run into in Route 5, 6, 7 and 8. Even when evolved into a Wigglytuff, it's not a particularly strong or effective Pokémon.

The pink little ball that resembles Kirby was also an unlockable character in Super Smash Bros. and Super Smash Bros. Melee. Due to the ribbon on her head in those games, most people just consider the main Jigglypuff to be a girl.

In the Nintendo 64 game Super Smash Bros., Jigglypuff is unlocked as a playable character by beating the single player mode on any difficulty, with any amount of lives & continues. It is usually the first character one unlocks. In Super Smash Bros. Melee, you unlock her in the same way, except you can also alternatively just play versus mode 50 times.

In Super Smash Bros. Melee, Jigglypuff has slightly improved from her near-useless appearance in the first game. Because of her lack of obvious high powered laser tackle punches, many underestimate the character. She is able to do multiple jumps like Kirby and has a one-hit KO move. However, she's extremely light (Making it easy to send her flying off the platform) and has no projectiles.

In the Pokémon anime series, Jigglypuff is a recurring character who aspires to be a great singer after the inspiration of Ash Ketchum and company. Unfortunately, every potential audience falls asleep before the song finishes. Jigglypuff does not usually choose an appropriate time to sing and has been a hazard many times, especially on moving vehicles. Because of this, Ash Ketchum and his companions often find themselves running away from Jigglypuff, who obviously isn't pleased with the fact that everyone falls asleep whenever it sings. It keeps with it a black marker, its "microphone," (which had once belonged to Ash) and uses it to scribble on anyone who dares to fall asleep while it's performing (after it inflates itself in anger with a distinctive "honk" sound). Only on two occasions has Jigglypuff believed that anyone had heard its song to the end: in the first, Jigglypuff realizes that Misty's Psyduck was sleeping with its eyes open, and in the second, a Whismur (a Pokémon with "soundproof" ability and therefore immune to sound-based Pokémon moves) had heard the song the first time, but fainted asleep later. Another Jigglypuff (In the episode Rough, Tough, Jigglypuff) had a Loudred (Whismur's evolved form and therefore also bearing the "soundproof" ability) listen to its song, but it didn't care as this Jigglypuff was using Sing for an attack.

In Pokémon Chronicles, Marina has a Jigglypuff, but when using Sing, people aren't affected in part because of Beedrill, because the beating of its wings are too loud.

This recurring gag with Jigglypuff was also used in Hey You Pikachu! on the Nintendo 64. A similar Jigglypuff also appeared in the US stage musical Pokémon Live! Prior to the storyline depicted in the musical, a Pokémon Trainer who happened to be deaf had caught Jigglypuff. When Ash and friends confront this trainer, he sends out Jigglypuff, who succeeds in putting the heroes to sleep. Since the trainer is deaf, he obviously cannot hear the song and is therefore immune to her effects.

In the US version of the Pokémon anime, Jigglypuff is voiced by Rachael Lillis, who is also the voice actress of Misty and Jessie.

In 2006, Viz released a series of ten DVDs based around individual Pokémon in celebration of Pokémon's 10th anniversary in the United States. Jigglypuff was released as volume 2, with Pikachu being the first volume. The Pokémon featured were determined by an online poll; after Pikachu, Jigglypuff was the most popular and was therefore released second.

Jigglypuff has had sizable roles in most of the various Pokémon manga series. Jigglypuff also features prominently in many of the Pokémon chapter books, which generally follow the anime series closely. The Pokémon Magical Journey manga series has a Jigglypuff as one of the main characters, parodying Hello Kitty. Jigglypuff is introduced to the series in a volume called Cooking With Jigglypuff (ISBN 1-56931-456-X). 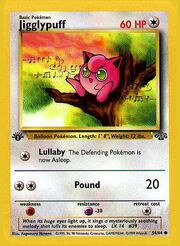 Jigglypuff has appeared in the Pokémon Trading Card Game in the following sets as a basic stage, colorless-type:

Jigglypuff's Magic Lullaby is part of the Pokémon Tales series for very young children. Written by Megumi Hayashibara and illustrated by Kagemaru Himeno, it tells the story of a female Jigglypuff who wants to make the other Pokémon happy by singing for them. But, as usual, her song puts them to sleep, and this makes her very sad. Her friend, a Bulbasaur, helps her resolve the situation.

As one of the most popular Pokémon, Jigglypuff has been made into several different toy and plush forms, as well as other items. These include:

In addition, Jigglypuff is often featured on products where a scene of several Pokémon are shown. An example of this is the full-sized Pokémon 747 aircraft by Boeing. Jigglypuff appeared on the starboard nose of the original white 1998 aircraft, and above the starboard wing of the 1999 blue aircraft. Jigglypuff was also on the nose of the international version of the plane. Model-sized versions of all the Pokémon aircraft have also been made. A compilation of Pokémon anime episodes, including "The Song of Jigglypuff" in which Jigglypuff is introduced, is available on both VHS and DVD. The compilation is entitled "Jigglypuff Pop."

In January 2006, a man on American Idol performed Jigglypuff's signature song in his audition. This shocked quite a few people, for the strangeness of the choice as well as the fact that an older person was familiar with Pokémon.