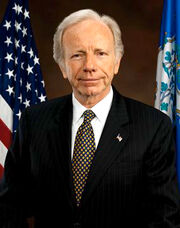 Joseph Isadore "Joe" Lieberman (born February 24, 1942) is an American politician from Connecticut. Lieberman was first elected to the United States Senate in 1988, and was elected to his fourth term on November 7, 2006.

"I was startled. It (Mortal Kombat) was very violent, and as you know, rewarded violence. And at the end, if you did really well, you'd get to decide whether to decapitate... how to kill the other guy, how to pull his head off. And there was all sorts of blood flying around."

"Then we started to look into it, and I forgot how I heard about Night Trap. And I looked into that game, too, and there was a classic. It ends with this attack scene on this women in lingerine, in her bathroom. I know the creator of the game said it was all meant to be a satire of Dracula; But nonetheless I thought it sent the wrong message."

Liebermans research researched that Pre-Genesis marketing data was mostly 7-12 year olds made up the market. While actual Sega Genesis data shows that the average user was 22 years old and only 5% of users were under the age of 13. Lieberman is concerned of the R rating in video games and issued several congressional.

As result the Entertainment Software Rating Board was created to regulate the content of violence and adult themes in games. Furthermore, the hearings caused Night Trap and Mortal Kombat sales surged.

To make fun of Lieberman Postal² developers assigned the easiest difficulty level is Libermode and one of the assignments was to get people to sign a petition that would "Make Whiny Congressmen Play Video Games." These jokes are due to Joe Lieberman's attack on the video game industry.