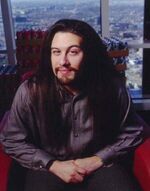 The infamous John Romero is a game designer that is best known for developing Doom and Doom II with John Carmack. Romero represented the design side of the team while Carmack represented the technical aspect. Romero is also known for developing other well known games like Wolfenstein 3D, Quake, Heretic and HeXen. He became popular in the industry due to his "rock star" like persona - He had long, girly hair, owned a pimped out Ferrari, and had an ego from past success. His hair has often been made fun of by internet webcomic Penny Arcade, where the main characters often mistake him for being a hot chick.

In 1996, John Romero left id Software, the company he helped found, and the developer of the Doom series. Because of differences within the company, Romero soon went to create a competing developer, Ion Storm. Their first big project was to be another PC FPS that Romero would design, called Daikatana.

Daikatana was to be the game that would cement Ion Storm as the new big thing in PC development. At the point of its inception, Romero was better known than the developer, so very early in Daikatana's development process, Ion Storm put out a controversial single page ad. This ad had simple black words on a red background, with no concept art, no screenshots, not even the name of the game. It simply read:

JOHN ROMERO'S ABOUT TO MAKE YOU HIS BITCH. 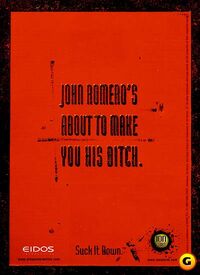 With, in smaller font at the bottom of the page, "Suck it Down" with the Eidos & Ion Storm logo. Needless to say, gamers did not like the idea of having to suck down whatever Romero was making. The hype for the game was huge, and Romero even claimed they would have it finished in 7 months. But they didn't. So they pushed it back. But they missed that date too. Eventually, the game would be delayed for years, long past it's original (and unrealistic) deadline, and at this point, John Romero and Daikatana became laughing stocks.