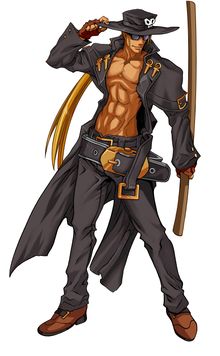 Johnny is a character in the Guilty Gear fighting game series, making his first appearance in May's ending in the first game, and is first playable in the second game, Guilty Gear X: By Your Side. A swashbuckling iaidōka, he is the captain of the May Ship and leader of the Jellyfish Air Pirates, a group of airship pirates. He is also a womanizer, as evidenced by the fact that the entire crew apart from him consists of (young) women, and that he hits on every single female character he comes into contact with. Johnny is also an avid hockey enthusiast, and possibly player, as illustrated in several of his win poses. It appears that May is infatuated with him. Johnny's last name is revealed in the Guilty Gear X Volume 1 drama CD to be 'Sfondi', as he is called as such by Ky Kiske when engaged.