Jolene is a character in Paper Mario: The Thousand-Year Door. She is the office assisstant to Grubba. Bandy Andy admits that she dissapears mysteriously (however, we later find out she has a secret identity and hangs around the Juice Bar). The only reason she works at the Glitz Pitz, is to find out what happened to Prince Mush, the original champion of Glitz Pitz. At the end of the chapter, she reveals that Prince Mush is actually her brother, and he decided to start fighting in order to earn money for their family. 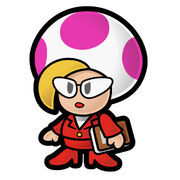