Jolteon (サンダース, Sandāsu, Thunders in original Japanese language versions) are one of the 493 fictional species of Pokémon creatures from the multi-billion-dollar Pokémon media franchise – a collection of video games, anime, manga, books, trading cards and other media created by Satoshi Tajiri.

Jolteon's name is derived from jolt, a sharp movement most beings experience when being electrically shocked. The -eon suffix is common to, though not exclusively shared by, all names of Eevee evolutions. Its Japanese name refers to thunder, the sound that accompanies lightning.

Jolteon is a quadrupedal mammal that bears traits of mainly of foxes (especially fennec foxes), and porcupines. Despite sharing physical traits with the fennec, Jolteon is much larger than the actual fox and falls into the height and weight range of the gray wolf. Jolteon is covered with spiky, bright yellow fur, with white spiky fur surrounding its neck. Its fur sparks with electricity, and it is able to use its spiky fur as a weapon. It has a small stubby tail. Jolteon is possibly based upon the legendary Japanese animal, the raiju.

Jolteon is able to gather negative ions from the atmosphere, using the resulting electricity to create lightning bolts of up to 10,000 volts. Its individual cells also create small electrical charges on their own, which combined with the static electricity caused by its body can result in powerful Electric-type attacks.

Jolteon is typically a sensitive Pokémon. It is said that it charges whenever its mood changes. Jolteon is a Pokémon which has electricity along with blood running through its veins. This charges up Jolteon, and it can reach incredible speeds when running (it is one of the fastest Pokémon). Its fur, which is normally soft to the touch, turns into sharp needles when it is angered. It can fire these needles at its opponent, which makes sense as it can learn the move Pin Missile.

Jolteon cannot be caught in any of the Pokémon games. It must be evolved from Eevee with a Thunder Stone. Jolteon's ability allows it to absorb electric attacks and convert them into HP.

Jolteon's high Special Attack make it ideal for Electric-type attacks, and its above-average HP gives it an unusual amount of stamina, allowing it to survive even Ground-type attacks once trained. It also has high a speed attribute allowing it to strike first. Its moveset is not expansive, though it learns Pin Missile (a bug-type move) which allows it to deal with Psychic types. It is a popular choice among Trainers looking for an electric-type for their team.

Jolteon's first appearance in the Pokémon anime was in Episode 40, The Battling Eevee Brothers!. In this episode, Ash's party comes upon a family of four brothers who all have Eevee evolutions. The three older brothers have Flareon, Jolteon, and Vaporeon, and they are pressuring their youngest brother Mikey to evolve his Eevee, too. What they fail to notice is that he doesn't want to. When Team Rocket steals all of the Pokémon, however, Mikey proves that his Eevee doesn't need evolving by beating Team Rocket when his brothers' Pokémon couldn't.

In Episode 56, The Ultimate Test!, Ash and his friends participate in the Pokémon League Admission Exam, part of which is battling using random Pokémon. Ash ends up using an Arbok while battling a Jolteon. Arbok's Wrap attack is stopped short by Jolteon's spiky fur, and then the snake Pokémon is knocked out by a Thunder attack.

A Magnemite rancher, who uses the small Pokémon to gather electricity from thunderstorms in Episode 103, Get Along, Little Pokémon!, has a Jolteon that acts as a sheep dog for the Magnemite.

In Episode 185, Trouble's Brewing!, a family of sisters in Ecruteak City, like the Eevee Brothers in Episode 40, are trainers of most of the different Eevee evolutions, including Eevee, Vaporeon, Jolteon, Flareon, and Umbreon. These Pokémon help in fighting off Team Rocket. These same Pokémon reappear, with Eevee having since evolved into Espeon, in Episode 228, Espeon Not Included!, when Team Rocket kidnaps all of them. The Pokémon end up being rescued by Ash's party with help from the Espeon and its trainer.

It also has a few other cameos, most noticeably in the second movie.

Red temporarily controls a Jolteon, which is actually his Eevee switching between its evolved forms. 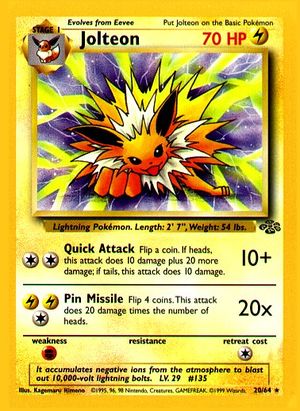 Jolteon, like all Eevee's evolutions, has a rather strong abundance of cards under its name. It has made all the following appearances: