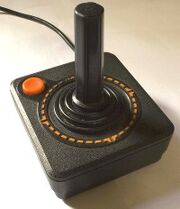 ad or gamepad is a device used in the palm of your hands to play video and computer games.

Prior to the birth or coin-op arcade machines, joysticks were first used for helicopters and other aviation vehicles. Subsequent to the rise of video games, flight simulators have been written for various computer systems and have used a variety of game controllers, including joysticks and flight yokes.

The tilt lever joystick is the oldest, simplest and most primitive type joystick used for gaming and other applications. They often have more than just a tilt-lever and trigger buttons. They also have thorottles, POV hats, Z coordinates, etc.

A joypad uses a D-pad rather than a tilt-lever. Joypad for more modern consoles feature miniature analog sticks that act is if they were joystick levers, but in a more miniature scale.