Jumpluff (ワタッコ, Watakko, Watacco in original Japanese language versions) are one of the 649 fictional species of Pokémon from the Pokémon Franchise – a series of video games, anime, manga, books, trading cards and other media created by Satoshi Tajiri.

Jumpluff's body is a blue circle with three cotton balls around and has two small red eyes. They resemble Blueberries, although are not designed as such.

Jumpluff are a migratory species Pokémon. They take advantage of their light weight and fluffy, buoyant cotton balls to take to the skies. They are very adept at catching the warm southern winds and navigating their way to any location in the world, typically overseas and until they encounter a cold air current, whereupon they will begin landing. This is the complete opposite of Drifloon and Drifblim who can't control where the wind takes them and could end up being blown anywhere.

While floating, Jumpluff release spores that propagate its offspring around the world. This method of reproduction is reminiscent of dandelions. As such, Jumpluff may be designed after the "Puff" stage of a Dandelion, sowing it's seeds.

Jumpluff cannot be found in the wild, but they can be evolved from a Skiploom, which in turn evolves from the more common Hoppip. Jumpluff have a drastically high Speed and a higher than average Defense and Sp. Defense but low Attack and Sp.Attack. However, they have a double weakness to Ice type attacks.

Jumpluff is known to be used as an annoyer, with moves like Poisonpowder, Sleep Powder, Stun Spore, as well as Cotton Spore. Another option it could be is a drainer, with moves like Leech Seed and Giga Drain while holding a Leftovers item. Either way, since they are quite fast, Jumpluff can be quite effective in some situations.

Jumpluff have made a few appearances. One has been used by the police force, as a cheerleader (using its cotton balls like pompoms) and to spread its spores on the floor so as to make footprints visible by Officer Jenny. Some other were in the episode " I Politoed You So!" Another also appeared as part of a group of assorted Grass-type Pokémon. Another also appeared, fought Ash's Sceptile and it was a tied match until Sceptile used Solarbeam and Jumpluff used Solarbeam also. The attacks collided and a big explosion was created and the two were massively hurt, but in the end, Sceptile stood out victorius.

In Pokémon Special, Eusine owns a Jumpluff which he uses to fly to different places. Another Jumpluff appears in the FRLG saga owned by Orm from The Three Beasts Rocket Trio. 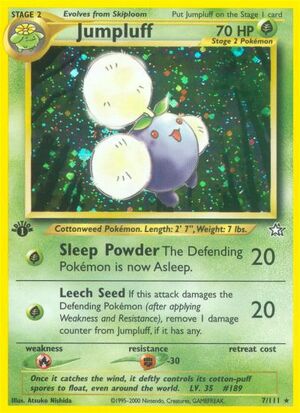 Jumpluff are more notable in the card game than in the normal video games because it upholds a unique tradition not seen in any other Pokémon in the cards. None of the attacks on any of its cards (nor any of the attacks on all existing Hoppip and Skiploom cards) ever require more than one grass energy. Jumpluff is therefore an exercise into how much talent can be wielded out of one energy card, and it shows in attacks like Solarbeam (on Neo Revelation Jumpluff), which does 30 direct damage for one energy.

These are Jumpluff's card appearances:

Jumpluff's name is a portmanteau of the words jump and fluff, referring to the fluffy cotton balls on its head and arms.