Jynx (ルージュラ, Rūjura, Rougela in original Japanese language versions) is a character in the Pokémon franchise, originally introduced in Pokémon Red and Blue. Jynx is noted more than other Pokémon characters due to the controversy over her original appearance (see below).

The name Jynx is a play on the English word "jinx", a curse or hex of bad luck. The reasoning behind this isn't immediately clear. Jynx's name could also come from "lynx", which could vaguely explain its ice type. Rougela comes from the word "rouge".

Jynx is based on the mountain crone Yama-uba, as the crone has golden-white hair and was often depicted in red kimono, two traits that Jynx also has. Jynx's lipstick and eyeliner (which it is sometimes depicted with) come from the Yamanba fashion trend, which is also named after the witch (Yamanba/Yamamba were alternative names for Yama-uba). Jynx can also be interpreted to be Ganguro in appearance.

Jynx has an imposing appearance, resembling an exaggerated stereotype of a husky human lady. She has purple/black skin, long blonde hair, and an eye-catching set of rose-red lips. The "clothes" it appears to wear are indeed part of its body, made to look like a pair of circular red bra and a red skirt. In the games, Jynx have no feet or footprints. In one short scene in the anime, though, a Jynx's feet are shown (see In the Anime). Also, Jynx's foot appears in the N64 Pokémon Stadium games when she uses the "Mega Kick" attack, which can be taught to her via TM.

In the Pokédex from FireRed and LeafGreen versions, Jynx is grouped with urban Pokémon, ones who lives in cities and towns, though they also live in caves (possibly another influence from the Yama-uba, who also lived in caves and mountains). Jynx vocalizes a mysterious language understood only by other Jynx, and no human or other Pokémon is able to understand it (though it sounds vaguely human). Scientists are studying Jynx's unique tongue to try and understand what is being said.

Jynx walks in a dance-like fashion, where her wiggling ugly motions with her hips are very seductive. In fact, her bouncing motions are alluring enough so that any person seeing it feels compelled to follow along in the same dance procession without giving a second thought as to what she is doing.

Jynx is known for its smooching habit, which it actually uses as a battling tool. A Jynx usually gives a sleep or confusion-inducing kiss to its opponents, using her signature attack "Lovely Kiss."

Prior to the modern Jynx design seen above and introduced more recently, Jynx originally had pure-black flesh.

This original design bore a striking, but purely coincidental, resemblance to blackface actors. A strong case can be made for Jynx being a parody of or homage to the Japanese Ganguro and Yamanba fashion trends, which were extremely popular when Pokémon was first released, but it can't be denied that blackface-influenced characters have appeared elsewhere in anime and manga - examples can be found near the beginning of Osamu Tezuka's early graphic novel Metropolis as well as the character Mr. Popo from the Dragonball series.

As Pokémon became more popular in the US, this perceived similarity to a racist image from America's past offended some. In particular, on May 4, 2000, an article was released that day saying that children's book author Carole Boston Weatherford had been personally offended and had accused Jynx as being a racist stereotype in an article page entitled Politically Incorrect Pokémon in the magazine Black World Today. She has described the Pokémon as "a dead ringer for an obese drag queen," which was liberated shortly after the anime episode Holiday Hi-Jynx had aired. Several other episodes later on concerning Jynx and others were also either banned or cut in USA. However, the above image can still be seen in the "Poké rap" segments of the original series (see anime).

In response to this controversy, in 2000 Nintendo changed Jynx's face from black to purple and its hands from blue to purple in localized versions, a change which would be reflected several years later in the Japanese versions of the games and the Advanced Generation anime. The newly-redesigned Jynx has white arms, whilst the arms of the original Jynx were red.

Because of the above controversy, Jynx's skin was changed from black to purple in Pokémon Stadium 2 and all later games.

In an odd twist, although Jynx, along with Electabuzz and Magmar, were all given pre-evolutions in the second generation, it seems that only the latter two were given evolutions in the fourth generation. The reason why is unknown, although it could be to avoid further controversy.

Jynx and Smoochum have received a new ability in the fourth generation, called "Forewarn", which allows them to see the opponents move list (Hypno and Drowzee also share this ability). Also, it should be noted that Jynx is, from the fourth generation on, unable to use physical moves such as Ice Punch and Body Slam effectively, both of which are learned naturally by Jynx, due to the new physical/special split based on the nature of a move rather than its type.

Jynx made an appearance in the episode The Ice Cave, which was not aired in English-speaking countries, and in the episode Holiday Hi-Jynx, which isn't re-aired in USA but is in the UK, both because of the controversy over her appearance. It is also made a camo in "Princess vs. Princess" as a doll that Misty wins. She later appears in Pokémon Orange Islands series, in episodes still present in American rotations. Also, in the Orange Island series, Jynx was shown to have human-like feet in a cameo appearance. This likely happened because the Orange Island arc was a filler and produced before Gold and Silver versions of the game were made.

Her 13-second appearance in Pokémon AG episode 23 All Things Bright and Beautifly was cut out when the episode was localized for English-speaking countries. She later appears in episodes 116 and 117 of Pokémon AG, with the inoffensive purple skin color.

In episodes 116 and 117, because the main episode order of these episodes would have been during February which is also Black History Month, KidsWB chose to air these episodes out of order and air them in April after the Hoenn Championship League episodes as it would help build the ratings with the Grand Festival and Hoenn League episodes and it would have avoided offending people during February due to the Jynx controversy. However one exception was in the episode "Hi Ho Silver Wind!" (AG121) where a purple Jynx had a minor cameo which aired in February. These episodes were aired in the normal rotational order in the UK.

Jynx is voiced by Mayumi Tanaka in the original Japanese version of the anime.

Jynx's most notable role is being under the ownership of Lorelei in Pokémon Special. Lorelei's Jynx is noted for having the ability to generate voodoo dolls out of ice using its Ice Beam. When Lorelei draws crosses on any part of the dolls using her lipstick, ice shackles form on the specified body parts of her targets, eventually freezing the victim over completely. Even after the victims are broken free, the freeze induces lasting numbness in the areas where it was applied. Both Red (Special) and Sabrina suffered this condition and had to seek a cure atop Mt. Silver by bathing in the hotsprings there.

Another ability of Lorelei's Jynx is revealed in the Sevii Islands saga: it can create a wispy band of ice around targets, with which Lorelei can use to track down using her powder case. 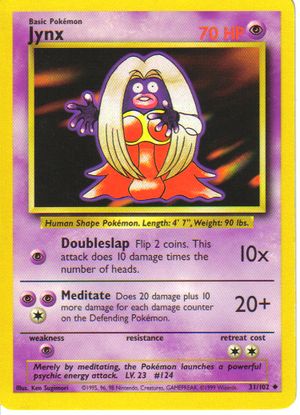