The name "Kabuto" derives from 兜 kabuto, the Japanese word for helmet, and 兜蟹 kabutogani, the Japanese name of the Horseshoe crab, the animal on which Kabuto is based. In the English translation, Kabuto's name was originally going to be Att, which - when followed by its evolved name of Lantis (later known as Kabutops) - is a pun reference to Atlantis.

As described above, Kabuto takes its appearance from the real world horseshoe crab. Since it is an ancient prehistoric Pokémon its design may be a combination of modern Horseshoe Crab and the prehistoric Trilobite. This is supported by Kabuto's lack of a tail, which Trilobites do not possess. It is likely intended to be a xiphosurid, with the Xiphosura containing many prehistoric species. It is crustacean in appearance, covered in a hard brown shell that has two small, dot-like eyes. Underneath the shell Kabuto's true form is obscured in darkness; the only features visible are four scuttlers and a pair of luminous red eyes.

Kabuto is a Pokémon that was once thought to be extinct. However, modern technology of the Pokémon world allowed scientists to clone Kabuto using genetic material extracted from fossils found on what once was the sea bed. Thus, the species has now been revived and re-introduced to the environment. Since then, living examples have been found extremely rarely, indicating that Kabuto's extinction was not so absolute as once thought after all.

Kabuto has made very few appearances in the Pokémon anime, though was seen in the movie: Pokémon:Lucario and the Mystery of Mew. Seen in the Tree of Life along with Lileep, Cradily, and other Pokémon previously confined to fossils.

Kabuto has existed in its current form for about 300,000,000 years. It is an aquatic Pokémon that used to hide on the sea floor, which is how some Kabuto became fossils in the first place. While concealed in this way, Kabuto leaves exposed only its hard shell, which protects it from any attacks, while the eyes on its back allow it to continue monitoring its surroundings. If Kabuto were to assume an upside-down position, its fortune would similarly turn around: it is helpless and defenceless in such a state, unable to flip over on its own.

According to the anime, oil extracted from a Kabuto is rumoured to have interesting medical properties, longevity being one of them.

Kabuto is found in Pokémon Red, Blue, FireRed and LeafGreen, if the player chooses the Dome Fossil in Mount Moon instead of the Helix Fossil. The fossil will be revived into Kabuto if delivered at the Cinnabar Island laboratory. The Dome Fossil can also be found in the Underground in Pokémon Diamond and Pearl after obtaining the National dex.

Kabuto has excellent Attack and Defense and average Speed for a Basic Pokémon, but its Hit Points stat is extremely low. It is quadruply weak against Grass-type attacks, which coupled with its mediocre special defense makes it especially susceptible to them. Kabuto can learn the Flying-type Aerial Ace attack (after evolving into Kabutops), which may give it the edge in such situations. Kabuto and Kabutops can also learn Ice Beam and Blizzard via TM, which would make for a nasty surprise, if Kabuto can last long enough or is fast enough to use it before a grass type can attack and knock Kabuto out. Other attacks commonly given to Kabuto include Ancientpower and Rain Dance, which will make its Water-type attacks more effective and double its speed thanks to its Swift Swim ability. Kabuto evolve into Kabutops at level 40, and can learn Slash immediantly after evolution.

Kabuto makes its first "appearance" in episode #13 (Mystery of the Lighthouse). Bill the Pokémaniac had dressed up in a giant Kabuto costume trying to understand the Pokémon's behaviour better. Its first actual appearance was in episode #46 (Attack of the prehistoric Pokémon), where it was discovered by Ash when Team Rocket tried to blow up Grandfather Canyon. Kabuto next appeared in episode #91 (Shell shock) in large numbers. Their fossils, which an island in the Orange Archipelago was full of, somehow "came to life" under the moon's red light. This is probably a reference to Chinese myths about "stone swallows", fossilized stone creatures that come to life and fly around. 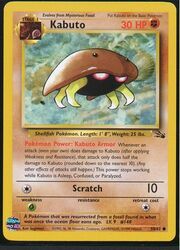 Kabuto, as seen in the Pokémon Trading Card Game

In the Trading Card game Kabuto appears in: