The name "Kabutops" derives from the same origins of the name "Kabuto" - Japanese for helmet and Horseshoe crab, and the "Triops". Its English name was originally going to be Lantis, whilst Kabuto was to be called Att (a pun slyly referencing Atlantis).

Kabutops is amphibious and arthropod-like, resembling a horseshoe crab or a trilobite. Although it lives in water, and can move at high speeds (comparable to a swordfish) by folding its limbs against its body, it comes out of the water to hunt. It bears a striking resemblance to Scyther.

Kabutops is a predator, but its nature of feeding is vampiric; instead of killing its prey, it uses its razor sharp claws to open wounds in its prey, and then drink its blood. It attempts to avoid killing prey, so it may feed at a later date.

Although it was assumed extinct, the player-character in the Pokémon Red/Blue games had a hand in bringing it 'back to life', and later games referenced their failed reintroduction into the wild. In the animé, however, it and the other 'ancient-type' Pokémon (including Omanyte, Omastar, Kabuto, and Aerodactyl) were all erroneously assumed extinct because they had left the surface world for subterranean caverns for some years.

Kabutops cannot be caught in any Pokémon game. It must be evolved from Kabuto at level 40. Kabuto can be revived from the Dome fossil found at Mt. Moon.

Kabutops is somewhat underused, despite its attack power being in the top 10 percent of all Pokémon. This may be due to in the first three generations of the Pokémon games, Kabutops could not learn rock type attacks apart from Ancientpower.

With the arrival of Diamond and Pearl's attack split, Kabutops now has potential as a physical sweeper. This is because some water attacks are now considered physical and now use the attack stat (such as Waterfall and Dive). Kabutops can also now learn several Rock type moves like Rockslide and Rollout as well as different type element attacks like Aerial Ace and Brick Break with the help of TMs.

Kabutops has made three famous appearances so far in the TV show. In the first, Ash and friends wind up on an island that is actually an amusement park run by Team Rocket inhabited by giant robot Pokémon. Among these 'Giant Pokémon' are Zapdos, Moltres, Kabutops, Rhydon, and the final forms of the three starter Pokémon (of Red/Blue): Venusaur, Charizard and Blastoise. A Pikachu is also among the giant Pokémon. In the second appearance, Kabutops was an ancient Pokémon sleeping at the bottom of a canyon along with unevolved form Kabuto and fellow ancients Omanyte and Omastar. When Ash, Pikachu and Team Rocket fall through a hole, the ancients attack. A battle ensues between them and Ash's Charmeleon. In Pokémon Heroes, Annie and Oakley resurrect one to prevent Ash Ketchum from getting to the museum.

In Volume 13, Brock possesses a Kabutops in his team. He explains that he met Kabutops at the Pewter Museum when Pewter City was invaded during the Elite Four saga, and has since then become a powerful fighter employing ancient attacks. 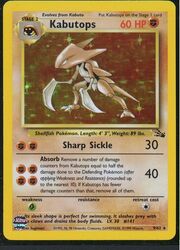 Kabutops, as seen in the Pokémon Trading Card Game

Kabutops, normally as a stage-1 Pokémon in the games, is a stage-2 Pokémon in the card game, because its pre-evolved form Kabuto evolves from the Mysterious Fossil trainer card. Therefore, in most of its appearances listed below, it is somewhat stronger than other Stage-1 Pokémon: