Kakuna (コクーン, Kokūn, Cocoon in original Japanese language versions) are pupal Pokémon found in the wild early in the Kanto and Johto regions, of which its larval form is the worm-like Weedle. In main series Pokémon games set in these regions, Kakuna are among the earliest and easiest Pokémon species acquired by players, either by catching one in the wild or training a Weedle past experience level 7 and evolving it into a Kakuna. Kakuna’s name is a variation of the word cocoon, which also serves as its Japanese name. Its name in the English beta version of Red/Blue was “Kokoon”. The name may also be based on the slang word, "Kahuna". The name Kakuna refers to the species as a whole, as well as to individual specimens in the games, anime, manga, trading cards, and other media.

Kakuna is the pupal stage of Beedrill’s evolution. Its entire body (except for a pair of bright, black eyes) is covered by a yellow shell which hardens to protect its soft body. Within the shell, it busily prepares itself for evolution into its adult form, much like Metapod. However, unlike Metapod, this process releases great amounts of energy, making the shell quite hot to the touch. In the wild, Kakuna are often found near or on trees, and because their range of motion is extremely limited, may be mistaken for dead. Carelessly approaching a Kakuna in this state would be extremely unwise, however, as it can still extend the barb of its poisonous stinger to protect itself from threats. In the first three video games (Green, Red, and Blue.), though, Kakuna possessed a pair of mantis-like arms (never stated to be mobile neither immobile) looking like it is holding a sword downwards, while in the anime and in all later games, it has no arms. It strongly resembles a mealworm's pupal stage. Rare shiny Kakuna have a Banana-Green (Yellowish-Green) color hue.

Kakuna are featured in the Pokémon video game series. Originally in Japanese, but later translated into other languages, the games have sold over 143 million copies worldwide.[1]

Kakuna can be found in Kanto and Johto, in locations such as the Viridian Forest, the Ilex Forest and the National Park. Like Metapod, it is an intermediate stage which quickly evolves into its final form. Also like Metapod, Kakuna caught in the wild will only know how to Harden, but those raised from Weedle will remember String Shot and Poison Sting.

Johto Gym Leader Bugsy fights with a level-14 Kakuna on his team.

Kakuna is vulnerable to Fire, Flying, Psychic, Rock (and, in Pokémon Red/Blue/Yellow, Bug) attacks, and strong against Grass-type Pokémon.

Kakuna also appears in the Nintendo 64 game Pokémon Snap, hanging from the roof of one of the rooms in the Tunnel course. Several Kakuna drop down on threads when an Electrode explodes, allowing the player to take pictures of them. 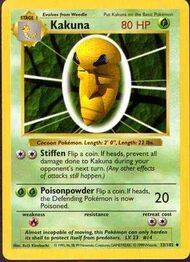 The Pokémon anime series and films are a meta-series of adventures separate from the canon that most of the Pokémon video games (excepting Pokémon Yellow[2]) follow. The anime features the quest of Ash Ketchum,[3] a young Pokémon trainer, as he and several other companions travel around the world with their Pokémon partners.

Kakuna first appeared in the Pokémon anime when Ash was travelling through Viridian Forest. Since then they (or their empty shells) have appeared every now and then, cocoons that’re literally just “hanging around”. A minor running gag in the series has characters bumping into trees in succession, only to have Weedle and then Kakuna drop down, before the Beedrill finally attack.

In the Pokémon Adventures manga, Gold’s family has a Kakuna, which is seen in the first chapter of the Johto Saga[4] (not translated in the U.S.) grooming Gold’s hair. Bugsy, as in the games, also has Kakuna.

In the Pokémon Trading Card Game, there have been Kakuna cards in the Base Set (included in Base Set 2 and the Legendary Collection), Gym Challenge (as Koga’s Kakuna), Neo Discovery, Skyridge, EX FireRed & LeafGreen, and EX Delta Species, most of which have been fairly uncommon, and therefore collectable.