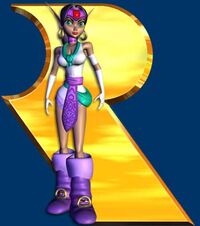 Kameo is the main character in the Xbox 360 game Kameo: Elements of Power.

In the game, Kameo takes many different forms to defeat enemies and overcome obstacles in various ways. These forms are:

The "Mike Tyson" of the Kameo universe. Pummelweed is a strong plant that boxes with his prickly fists.He was one of the three starting warriors. He is one of two plant Elemental Warriors, and the first you collect from a shadow troll. He can deliver a series of powerful blows with his fists or travel underground to strike with an uppercut.He was the first creature created by Rare, and was inspired from a member's love of Boxing

Chilla is a yeti like creature. Chilla is one of the most versatile monsters that Kameo has at her disposal.He is the first ice elemental and the sixth you collect, Lenya was holding him. Chilla can cause a massive ice shower to come down and hit his opponents, he can scale icy terrain, can impale his enemies then use them as weapons, and a host of other things as well. He's a jack of all trades.He is also Rare's favorite creature.

Giving a nod to games like Super Monkey Ball, Marble Madness, and Metroid, Major Ruin is an armadillo creature who rolls around as a ball and will traverse half-pipe structures, circulus rooms, and can use his mighty and unique abilities to help Kameo in her fight against the trolls.he is the first Stone Elemental Warrior, and the fourth warrior for you to collect.He was one of the three starting elemental warriors.

As a water creature, Deep Blue will use his abilities to their fullest by exploring underwater caves and defeating troll submarines. He can also propel himself with the water thrusters on his arms and also use them to defeat his enemies similar to Nintendo's Super Mario Sunshine.

Although he's gone through several physical changes, 40 Below's moves have not been altered. I think that's for the best because he is one of the coolest monsters Rare has come up with (no pun intended). From throwing snowballs to giant icy rocks, 40 Below is sure to impress.

Controlling a pile of rocks has never seemed so fun. Well, that's probably because most games don't let you control a pile of rocks :P. Rubble's moves consist of "self-destructing" himself where the rocks that make up his body explode into many different directions and also hurdling single rocks at his enemies.

The other plant element monster. The venus flytrap-esque monster, Snare, has the ability to eat enemies and then spit them back up to attack other enemies and also hit switches as well as other objects from a distance.

A powerful Dragon who spews fire out of his mouth. Colossal in both size and strength, Ash is a great asset to Kameo and is yet another interesting monster Rare has come up with.

This is a monster that really hasn't gotten a lot of screentime. He is probably the most unique out of the batch of monsters. He can walk on water, slap people, and use his "elasticness" to his advantage if you know what I mean.

Again, this is another monster that hasn't been shown nearly as much as the others. In fact the only time he's been seen is in short gameplay clips of him carrying a giant egg full of orange goo. It appears that he is abnormally strong despite his size.