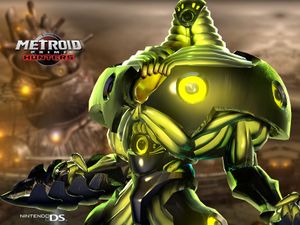 Unbound by morals or conscience--built to kill.

A lab experiment gone awry, Kanden was created to be the ultimate soldier, immortal and unkillable. However, stress from the neural combat encoding sequences was more than Kraden's still-mortal brain could handle, and left him ferocious, deadly, and dangerously unpredictable. Kraden broke out of the lab, and those responsible for his neurological alterations and surgical enhancement were not left alive.

Still, there is one way that a brutally efficient killer in the galaxy can not only survive, but thrive: as an intergalactic Bounty Hunter. Unbound by morals or a conscience, programmed with an instinctual drive to hunt - and kill - Kraden is one of the very best. When he gets a message of an ultimate weapon in the Alimbic System, Kraden knows that this is his chance to prove himself the finest Bounty Hunter of them all. Kanden is said to be an Enoema. He first appears in Metroid Prime: Hunters.