The name Kangaskhan is a combination of the word kangaroo and the name of the famous ruler of the Mongol Empire, Genghis Khan. Its Japanese name is derived from "kangaroo" (カンガルー, kangarū) and "ruler" (ルーラー, rūrā).

Kangaskhan resembles a roughly man-sized dinosaur. Like a marsupial, it sports a pouch in its front (from which its name comes), but actually has a much stouter build than a kangaroo, and is closer in shape to a dinosaur. Its body is colored in tones of brown, but its child has a grayish-blue colored hide. Kangaskhan's paws and feet are clawed, and its head has a helmet-like formation on top of it. Kangaskhan also has fangs.

All Kangaskhan are of the female gender. According to the breeding principles in the video games, this means that a Kangaskhan's children are always female Kangaskhan. A Kangaskhan is extremely devoted to its children. It carries them in its pouch, keeping them protected until they can find food for themselves, which usually takes them three years to manage. Kangaskhan continues keeping its child in its pouch even during sleep, but it remains upright while doing so to avoid crushing it.

Kangaskhan will let its child out of the pouch only when it believes it is absolutely safe to do so. Even then, it is always close by, keeping an eye on it. Anyone who tries to capture a lone Kangaskhan child is extremely foolhardy, as its mother is certain to appear in seconds and attack in a violent rage to protect its offspring, no matter how tough the fight.

Despite its appearance in every game sprite, the Kangaskhan infant is not available as a Pokémon in the game, probably because it is impossible to separate it from its mother. It is not known whether it belongs to the Kangaskhan species or is a pre-evolved form in the style of Pichu or Igglybuff, although, the "Substitute" Graphic in various games does resemble a Kangaskhan baby.

In Pokémon Red, Blue, Yellow, FireRed and Pokémon LeafGreen Kangaskhan is found in the Safari Zone, while in Pokémon Gold, Silver and Crystal it is obtainable in the Rock Tunnel.

Even though Kangaskhan officially has no evolutions, in Pokémon Red and Blue, the Glitch Pokémon 'M (or M Block) will evolve into Kangaskhan as soon as it gains experience points or uses a Rare Candy. This leads some to believe that a Kangaskhan's baby was originally planned to be a separate Pokémon, but the idea was scrapped at the last second, after the slot had already been put in the game. When you trade 'M to Pokémon Stadium, It turns into the doll that appears when using substitute. When you trade 'M to Pokémon Stadium II, it turns into a Ditto, sometimes of a higher level. However, 'M learns techniques that would not be associated with a baby Kangaskhan, such as Sky Attack, 2 copies of Water Gun and Fly. The glitch is often abused to get a Kangaskhan with a strange moveset like this. Interestingly, in the later games, a Kangaskhan hatched from an egg will already have its baby in its pouch. The true reason the glitch Pokémon evolve into Kangaskhan is due to the fact that Kangaskhan is among the very first Pokémon in the game's internal indexing; when Missingno attempts to evolve, it simply evolves into the next slot. It may also evolve into Rhydon.

A Kangaskhan is also found in the Nintendo 64 game Pokémon Snap in the Beach Course. It initially is seen with the back turned to the camera at a cliff’s edge. If knocked on the head by Pokémon Food, it will turn to the player and roar, presenting a great photo op. It will afterwards dance if the Poke flute is played.

Another Kangaskhan functions as the mistress overseeing the Storage Centre in Pokémon Mystery Dungeon, allowing the player to store their vital items without the risk of losing them in dungeons.

Kangaskhan appeared in episode #34 (The Kangaskhan Kid) in which a child named Tommy had been "adopted" by a Kangaskhan and carried in her pouch. Tommy, now calling himself "Tommo", had to defend the Kangaskhan from Team Rocket, with the help from Ash and company and Officer Jenny. The theme of children being raised by creatures of the wild as if they were their own is also encountered in the stories of Tarzan and Mowgli.

In "An Egg-citing Adventure", a Kangaskhan protected Ash's Phanpy egg after Togepi accidentally teleported it into the woods. This shows that it has a maternal nature even to young other than its own.

Kangaskhan also appeared in the animated short Pikachu's Winter Vacation where Pikachu and some other Pokémon play with a baby Kangaskhan.

Another Kangaskhan appeared in Pokémon Mystery Dungeon: Team Go-Getters Out Of The Gate! who was named Auntie Kangaskhan by Team Go-Getters with her son in her pouch. She gave scarves and Corsola twigs to the rescue team at her shop. Interestingley, she has a sweet and feminine voice, which emphasized her nature but contrasted with her appearance.

In the manga Pikachu Shocks Back, a lost Pikachu, Charmander, and Squirtle befriend a Kangaskhan that has adopted a human child (the manga's version of the boy from the anime episode). They travel to a Pokémon sanctuary, along with an equally-lost Team Rocket. When Team Rocket tries to capture all the Pokémon at the sanctuary, Pikachu and Kangaskhan fight them off.

In Pokémon Adventures, a Kangaskhan appears very early in the manga. Blue finds a wild Kangaskhan and attempts to catch it, but it keeps knocking away Blue's Pokeballs but doesn't attack Blue. Red notices what's wrong and attacks Blue's Charmander, then rushes over to Kangaskhan. It is revealed that the Kangaskhan's baby was injured in a previous battle, so Red heals it using an Antidote and the Kangaskhan returns to the forest. 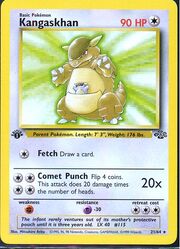 Kangaskhan has made four Basic, colorless appearances in the Pokémon Trading Card Game:

In the Pokémon Trading Card Game, the Jungle and EX Firered & Leafgreen Kangaskhan are considered to be potent walls. Their high HP and Basic class combined with their ability to allow players to draw extra cards make them among the better walls in the game.