Katamari Damacy (塊魂, Katamari Damashiii) is a video game designed by Keita Takahashi and published by Namco for the PlayStation 2, released in Japan on March 18, 2004 and the United States on September 22, 2004.

Katamari means "clump", Damashii is the rendaku form of tamashii (soul or spirit). Therefore, the whole phrase approximates to "clump spirit". It might also be considered a pun dama means ball while shii can be translated as circumference, and the two kanji that form the name look nearly alike in a kind of visual alliteration. The name is officially transliterated as Katamari Damacy in all releases.

The King of All Cosmos got drunk one night and accidentally destroyed all the stars in the sky. He sends his son, the Prince (who is five centimeters tall), to Earth to gather material with which to reconstruct the stars, constellations, and ultimately the Moon.

To gather material, the Prince pushes around his katamari, a magical ball capable of sticking to anything smaller than itself that it rolls over or against. Initially, the katamari can only pick up tiny items such as loose change, thumbtacks, and ants. As it becomes covered with things, the larger clump can pick up larger items, such as fruit, milk cartons, small animals, children, cars, houses, stadiums, office buildings, and sperm whales. There are also Royal Presents hidden in the levels for the Prince to pick up, including a camera which can take photos.

The story is told mainly through cutscenes following each level. The scenes follow a mother and two children intent on watching the father, an astronaut, begin his trip to the Moon. During the game, the son seems to be the only one noticing the changes in the sky and the appearances of the King and the Prince; the daughter senses the changes in the constellations, reacting with joy when a new constellation is remade.

The game's graphical style is simple rather than realistic; the graphics have a blocky appearance that economizes polygons. The cutscenes are similarly styled, with everything composed of simple shapes, far from any kind of realism. The individual objects are low in detail to allow for a large number of things on the screen to be rendered quickly without slowdown or popup. 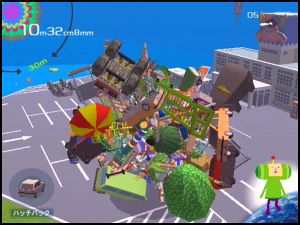 Katamari Damacy is a radical departure from traditional video game concepts: there is no attack button, there are no "special moves" to unlock as the game progresses, and there are no bosses, yet it also doesn't fall into the familiar mold of a "puzzle game" like Tetris. The katamari is moved entirely by the two analog joysticks in a manner similar to the classic arcade game Battlezone (both sticks up to go forward, both back to go backwards, one forward and the other back to turn, etc.).

The Prince pushes his katamari over smaller objects, picking them up and increasing the size of his katamari, which in turn allows him to grab larger objects. The difficulty of picking up each object is not directly related to mass or volume, but rather the object's height, width, depth, including the empty space within these dimensions. This sometimes defies common sense, as an open beach umbrella is more difficult to pick up than a small car. Long, narrow items, such as pencils, fences, and lampposts, are easily grabbed, even if the length of the object is significantly greater than the diameter of the katamari. This can make rolling awkward for the player as the object protrudes from the katamari.

There are three kinds of levels in the single player mode: "Make a Star", "Constellation", and "Eternal".

In Make a Star, the player is given a time limit (in minutes) and a goal (in centimeters or meters). The player must grow the katamari to the indicated size before time runs out (and, if successful, is allowed to continue growing the katamari until time runs out). At the end of the limit, the katamari, along with the objects attached to it, becomes a new star. The final level, Make the Moon, is played the same way. Unlockable rewards are given if the player can reach the goal size very quickly or grow the katamari to much larger than required.

In the Constellation levels, the goal is tailored to match the constellation given. Most levels are centered around collecting as many themed items as possible. For example, to recreate Cancer, the katamari must collect enough crabs. To recreate Virgo, the required item is "maidens"; any human female, from young girls to old women; even representations, like dolls and statues, will count. For Pisces the player must collect fish; for Gemini the player must collect identical pairs of items. Other Constellation levels have a more specific goal. To recreate Ursa Major, the player must find and grab the largest bear (real or fake) he or she can find. Rather than give the player the full alloted time, the level ends the moment the katamari grabs a compatible item. The player must keep the katamari away from tiny bears before it is big enough to grab a more substantial bear. Taurus has a similar goal, to catch a large cow.

There is a level to make the North Star, which is considered a constellation in the game. The player's goal in the level is to get the katamari to exactly 10 meters, with no time limit or size indicator. There is a bit of leeway, however, as the resulting katamari is only measured in meters and centimeters, not millimeters.

In the Eternal levels, there is no goal, and no time. The player is free to roam around the level getting as big as possible, until they decide to quit. There are only three Eternal levels available, and they must be unlocked by building a katamari much larger than the required size on Make a Star 4, Make a Star 8, and Make the Moon. The Eternals are nearly identical to the standard versions of the three levels, but they produce separate five-pointed stars in the sky.

There is a two-player game in Katamari Damacy. The screen is split vertically; player one is on the left, and player two is on the right. Both players compete at the same time in a small arena to collect the most objects within three minutes. The playfield is replenished with new objects periodically. 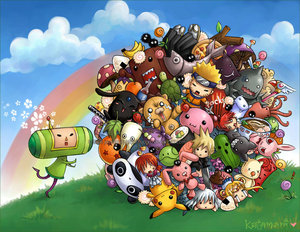 Katamari Damacy is an unusual game, and it was originally presumed that it would have limited appeal and this would prevent a release outside of Japan. However, due to its popularity at trade shows, and a write-in campaign, Namco decided to release it in the United States, though a European release is unlikely. Furthermore, to spur sales of the game, it was priced at only around US$20.00, less than half of what most new games are priced. The game was very well received by professional reviewers, and was mentioned and praised on Tech TV and in the popular gaming cartoon Penny Arcade. Most retailers underestimated the demand for such a quirky game, and only purchased a few copies- it rapidly sold out nationwide. Also, the game did not switch from the metric system for the release as opposed to measuring in inches and feet.

Katamari Damacy won the gold prize at the 2004 Japanese Industrial Design Promotion Awards, the first time a video game has won that award. Furthermore, it also won 9th place at PSM's Game of the Year Awards for 2004 and also: