Kid Chameleon is a 1992 platform game released for the Sega Genesis. The plot of the game is that the boss of the new virtual reality video game "Wild Side" begins abducting players and the main character, Casey, goes to beat it and rescue them. 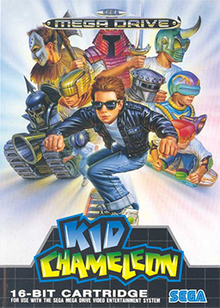 He does this by using masks to change into different characters in order to use different abilities. It was later released in Japan as Chameleon Kid (カメレオン キッド Kamereon Kiddo). After its initial release in 1992 for the Genesis, it was later re-released a number of times in the 2000s, including part of the Sega Smash Pack 2 for the PC in 2000, the Sega Genesis Collection for the PlayStation Portable and Playstation 2 in 2006, as a digital release on the Wii's Virtual Console in 2007, Sonic's Ultimate Genesis Collection for Xbox 360 and PlayStation 3 in 2009 and is included in The Sega Forever collection release for iOS and Android (operating system) in 2017[1].

The player, as Kid Chameleon, progresses through a series of levels, containing an array of deadly enemies and obstacles. Most levels contain a flag, which is the primary goal of each level, from which the player progresses to the next level. However, a number of teleporters throughout the game can warp the player not only to different places in the same level, but also to different levels, and sometimes to an entirely different path through the game. At the end of the game, Kid fights and defeats the final boss, Heady Metal. Kid Chameleon contains 103 levels, of which only about half are on the "main path" (traversing levels only by flags), and also counts 32 smaller unnamed levels, simply called "Elsewhere". Despite the game's considerable length, there was no password system or other method of saving the game (although re-releases in compilations and Virtual Console include their own save features). There are several bonuses that can be earned at the end of certain levels (in which the flag is touched), including beating a time limit, not getting hit and not collecting any prizes.

As Kid Chameleon moves through the game's levels, he gains access to masks that transform him into different characters. Each character has different special abilities and varying numbers of hit points. Collecting a mask that the player is already wearing will restore its health. The sheer amount of variety in gameplay due to the various characters is part of what gave Kid Chameleon such an addictive style; few levels repeated the same structure and they usually had specific strategies and characters to be beaten. In addition to the offensive abilities of each form, the Kid could also defeat enemies by jumping on them, although he may take damage from some enemies by doing so. Each form can also make use of Diamond Powers which require diamonds collected in the game to use, accessed by pressing A + Start. Players lose a life if Kid Chameleon loses all his hit points in human form, is crushed, falls into bottomless pits or lava or touches the drill wall which appears in certain levels, or if time runs out. Extra lives and continues can be found in the game, with additional lives awarded for every 50,000 points.

The game is also a part of the Sega Genesis Collection for the PlayStation 2 and PlayStation Portable. It was released for the Virtual Console in Japan on May 22, 2007; North America on May 28, 2007; and Europe on June 1, 2007. It was also released in addition to a series of other Sega games, including Shining Force and Comix Zone, in Sega Smash Pack 2. The game has also appeared in Sonic's Ultimate Genesis Collection for Xbox 360 and PlayStation 3.