Killzone 2 follows the events of Killzone and Killzone: Liberation, and takes place entirely on the planet Helghan, the home-world of the Helghast, who invaded an Interplanetary Strategic Alliance (ISA) colony. Two years after the Helghast assault on Vekta, the ISA has launched an assault on the enemy's home world of Helghan. The ISA goal is to capture the Helghast leader, Emperor Scolar Visari, and bring the Helghast war machine to a halt. Players assume the role of Sergeant Tomas "Sev" Sevchenko, a battle-hardened veteran of the special forces unit known as "The Legion", who go on a mission to take out the Helghast threat.

During the invasion of Helghan, Sev's unit is deployed behind enemy lines to assist the main invasion force. Tasked with securing the enemy capital of Pyrrhus, the team quickly discovers that the Helghast are a more formidable enemy on their home planet. Not only have they adjusted to Helghan's hostile conditions, they have also harnessed a source of power they can now use against the ISA - the very planet on which they live. A barren, unforgiving world, Helghan provides a ready defense with thick, acidic air, dust clouds, and violent surgical lightning storms. Sev discovers his squad is not just fighting enemy forces – their fiercest opponent may be the planet itself. 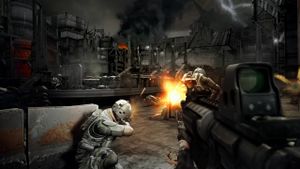 With Killzone 2, Guerrilla Games aimed to provide the player with an immerse and cinematic gameplay experience that is grounded in reality with what they call "Hollywood Realism". The game is presented almost entirely from a first person perspective, aside from vehicular combat. Killzone 2 features a "lean and peek" cover system which allows the player to take cover behind an object and then pop out to fire at enemies. The "lean and peek" mechanic stays in first person view at all times. It has also possible for Sev to be able to pilot vehicles, such as tanks. Many classic weapons and vehicles from previous Killzone installments returned, such as the M82-G and the StA-52 LAR. The Sixaxis motion control feature is also utilized in performing certain actions such as turning a valve, arming an explosive charge and sniping.

"Warzone", the title of the multiplayer component of Killzone 2 has been developed by Guerrilla Games in conjunction with the game's single-player campaign. The multiplayer gameplay is class-based, meaning the player can choose a class of character which is specialized for a specific role to better suit the player's needs in battle. There are 7 classes in total, in which the player can mix and match two according to their playing style, and can switch abilities upon death. The player has the option to use BOTS in multiplayer battles. Warzone plays out through dynamic matches whereby multiple game types are played in a single round. The game ships with five different game types including Assassination, Search & Retrieve, Search & Destroy, Bodycount and Capture & Hold. Up to thirty-two players can connect online, and group into squads of up to four players. Furthermore, two squads can group together as a faction of eight players. Killzone 2 also offers a clan system, which allows clans of up to sixty-four players to compete for "Valor Points", an in-game currency that clans can use to bet on tournaments.

At E3 2005, Killzone 2 was debuted with a trailer depicting soldiers landing in a hostile war-zone on Helghan and fighting Helghast forces. Critics in the media argued that the trailer shown at the trade show did not show actual gameplay footage, as its high level of visual detail has been argued to be impossible to render in real-time on the PlayStation 3 and the audio mix of the trailer was slightly delayed. SCEA's Vice President, Jack Tretton, stated that the footage of Killzone 2, that was believed to be pre-rendered, "is real gameplay everybody's seeing out there. Several days later, Phil Harrison, SCEA Europe's Vice President of Development, stated in an interview that all of the footage of PlayStation 3 games at E3 2005 were "running off video" which was "done to PS3 spec".

At the Game Developers Conference in 2007, a Killzone 2 teaser was shown behind closed doors, and was never released to the public. It featured various battles, destructible environments, and lighting effects among others. Killzone 2 was shown to a panel of journalists at a special pre-E3 2007 event in Culver, California, and then the next day to the public at Sony's E3 press conference. An in-game trailer showing real-time gameplay of Killzone 2 was also released, along with several videos of extended gameplay. A number of media outlets since E3, such as the BBC, have referred to Killzone 2 as being "one of the most cinematic and immerse games ever produced on a console." At the Leipzig Games Convention in 2007, Killzone 2 was presented in playable form to the media. It was the same demo level as shown at E3 2007, although journalists were allowed to play it hands-on. At Sony's PlayStation Day 2008, the first level in Killzone 2’s single-player campaign was presented, named "Corinth River". 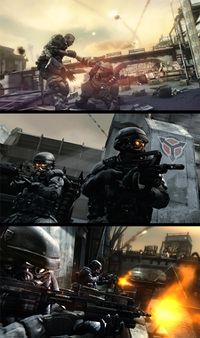 Screenshots of the "Corinth River" level from Sony's PlayStation Day 2008

Beta access was given to a select number of North American and European PlayStation Network subscribers. The beta consisted of three online multiplayer maps; "Blood Gracht" (small), "Radec Academy" (medium) and "Salamun Market" (large), with unlockable ranks and character classes ("badges"). Beta testers had their own statistics and have the ability to enter clan competitions. Beta access was private and thus could not be shared with other PlayStation Network accounts. Also, beta testers are tied with Sony Computer Entertainment Inc. by a non-disclosure agreement; therefore they were not allowed to reveal contents of the beta experience.

A demo card, granting access to a Killzone 2 demo, was also offered to those who pre-ordered the game at GameStop, and will be available for download on February 5, 2009.

The Killzone 2 beta version was displayed in high definition 720p, locked at 30 frames per second.

Michal Valient, a Senior Programmer at Guerrilla Games, presented details of their Killzone 2 game engine at a Developers Conference in July 2007. As with many other titles published by Sony Computer Entertainment, including LittleBigPlanet and inFamous, Killzone 2 uses a deferred rendering engine which enables far greater control over the game's characteristic lighting palette, while maximizing processor throughput and limiting shader complexity. Other games to use similar approaches include Rockstar Games' Grand Theft Auto IV and GSC Game World's Stalker: Shadow of Chernobyl. However, this approach does create some additional problems; notably with respect to anti-aliasing and transparencies. The former was solved using a MSAA Quincunx (multisample anti-aliasing) solution, and the latter by the addition of a standard forward rendering path. 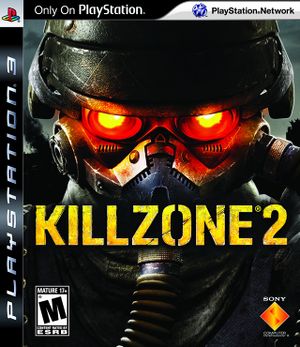 Killzone 2 has met with early critical acclaim. Based on 13 reviews, Killzone 2 currently holds a Metacritic score of 95.

In Issue 27 of the Official PlayStation Magazine - Australia, Killzone 2 received a 10/10, and the game was said to have "amazing, fluid graphics and animation" as well as "beautifully constructed levels and intense sweaty-palmed action". The review concluded saying "Killzone 2 is the best console first person shooter ever made."

In their February 2009 issue, the US version of Official PlayStation Magazine gave Killzone 2 a score of 5/5, stating players "will instantly tag this sequel as a powerful contender for best game of 2009."

In the February 2009 issue of the Official UK PlayStation Magazine, they awarded Killzone 2 a 9/10 with the editor Tim Clark stating, "The most surprising thing isn't the visuals - anyone who's seen recent footage will know it's the most handsome thing on the system - but the fact it's got the gameplay to match. Killzone 2 is without question the most exciting release due in the first half of 2009."