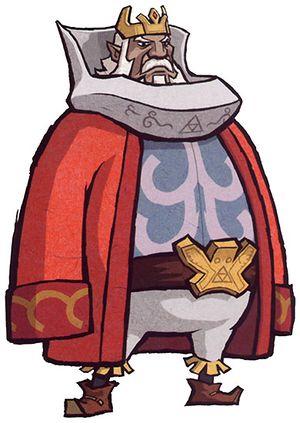 It's good to be king.

A fictional character in the Legend of Zelda series.

He invented the Gossip Stones, ruled over the Kingdom of Hyrule, and was the father of the Princess Zelda that appeared before Wind Wakers flood.

Shortly after Ganondorf was sealed away in Ocarina, the evil king began to gradually regain power and weak havoc on the land of Hyrule. The people of Hyrule waited in vain for The Hero of Time to return. Eventually, King Hyrule used the Wind Waker to direct the seven sages who played a magic song that would summon the gods for a divine intervention.

The gods answered their prayers for salvation by ordering the people to the mountain tops and creating a mighty storm which drowned the land (making the mountains into islands in The Great Sea), and placing Hyrule in a protective bubble. King Hyrule became an immortal guardian spirit that lived under the waves for a hundred years. The land inside the bubble was frozen in time, effectively sealing Ganondorf and his minions away from the Hylians. However, Ganondorf gradually regained his former power. When the King sensed that Ganondorf had returned, King Hyrule used his invention, the King of Red Lions to guide Link through his journey to save his sister, incidentally making him into the Hero of Wind.

At the end of The Wind Waker, the Triforce comes together and Daphnes (using his unexplained teleportation powers, that are probably the result of being a ghost) reaches it first, wishing to dispel the protective bubble around Hyrule and flood the old land away. Both Daphnes and Ganondorfs spirits were tied to Hyrule, and destroying it was the only way to stop Ganondorf from taking over. The King said that destroying the old land of Hyrule (and subsequently himself, and Ganondorf) gave hope for the future, referring to young Link and Zelda.