Character creation involves selecting a gender, race and class. Each race has its own hidden advantages. The player may choose for their character to be a Fighter, Barbarian, Martial artist, Mentalist, Healer or Thief.

A character in the Fighter class can become a Paladin. Fighters and Mentalists can also become the hybrid class Fighter/Mentalist.

Although the first FE was 8bit, a 24-bit FE was created to modernize the look of the game. An option was added to allow a player to toggle back to the 8-bit legacy graphics for a retrograde nostalgic feel.

The game is considered a top-down isometric 2D game and is tick-based. While this is a simple interface with simple graphics, the community cohesion is the largest draw to players both from the past and the present and is part of this game's charm. 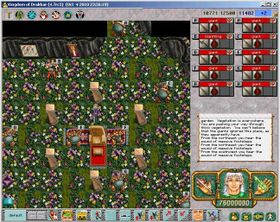