The name Kingler is most likely a portmanteau of king and angler. Its name could also be interpreted as a combination of king and fiddler, both species of crab. It is an example of one of the few Pokémon names that did not change in the transition from Japanese to English (another example being Pikachu).

Certainly the 'King' of all Crabs, Kingler is based off the King Crab; however, its name also relates to the boney orange 'crown' adorning its head. Kingler possesses a orange upper body while its underside is lighter in color, and it possesses two powerful claws, one of which is much larger in size, like the fiddler crab. But being most crabs have their right claw enlarged, unlike Kingler, and that most humans are right handed, it could be defined that all, or at least most Kingler, and probably Krabby, are left-clawed.

The most noticeable facet of Kingler's being is its humongous claw. The claw grew to this size to protect Kingler from possible predators. It has the crushing force of 10,000 psi, but it comes at a price. The claw is very heavy, forcing Kingler to spend much of its time in the water, where the claw doesn't weigh nearly as much. However, due to this immense size and weight, Kingler can use the claw as a club-like weapon.

Kingler can transition from water to land with relative ease, and when above water, it communicates with others of its species by waving its claw. It has four legs, which it uses to scuttle around. Its claw is normally kept low to the ground in order for Kingler to keep its stamina up.

A crustacean, Kingler wears a strong exoskeleton that protects it from harm. While the skeleton is somewhat heavy, it offers Kingler incredible protection.

Kingler first appears in Pokémon Red and Blue, and is the final form in the Krabby evolutionary line. It evolves from Krabby. and in the Red, Blue, Yellow, Pokémon Gold, Silver, and Crystal versions of Pokémon in the first two generations of Pokémon games for the Game Boy Color, though in most cases it must be evolved from Krabby at level 28. In the Third Generation of games for the Game Boy Advance, Kingler can be found in the FireRed and LeafGreen versions, though it is much more common to find it and Krabby in the LeafGreen version than in the FireRed version.

Kingler has an extremely high attack stat equivallant to Ho-Oh's along with a very high defence, however his HP, special defence and speed are very low.

In The Battle for the Badge, Giovanni, the evil genius behind Team Rocket, owned a Kingler and he used it in the Gym Battle with Gary's Nidoking and Arcanine. Despite the type disadvantage, Gary's Arcanine defeated the Kingler. This Kingler was used later by Jessie, James and Meowth. Giovanni loaned his Kingler to them when he put them in charge of the Viridian Gym while he was out.

After Ash's Krabby evolved into Kingler during the 1st round of the Indigo League, it defeated a Seadra and a Golbat. Kingler was also used in the third round on the Ice Field where he is seen defeating Cloyster, but was getting beat badly against Arcanine in the next fight so Ash called him back to his pokeball. Kingler was barely used during his adventures in Johto and Kanto, although it was also used in the Whirlpool Tournament, in which it defeated Misty's Poliwhirl, but lost against Misty's Psyduck. Ash was also going to use Kingler in the Johto League, but an accident caused by three Voltorbs, injured Kingler, and therefore it couldn't battle. Ash's Kingler still lives at Professor Oak's Lab and is seen again in "The Right Place At The Right Mime". Kingler has not been used in a battle in over 250 episodes, but still has a large fanbase. Recent references have been made to it, as in one of the more recent "Battle Frontier" episodes, Kingler's 'signature' (a print of his claw) was presented to Ash, along with Totodile, Muk, etc.

Kingler was also seen as one of the Pokémon involved in the inter-gym fight in Dark City (between the Yaz and Kaz gyms; Kingler is one of the Kaz Gym's Pokémon), and was also used by one of Misty's opponent's in the Princess Festival. 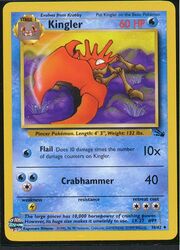 Kingler has only four Stage 1 Water-type cards under its name. This is a small number, considering that Kingler is of the first generation of Pokémon. It has appeared in the following sets: