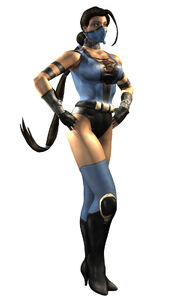 A primary hero in the Mortal Kombat saga, Kitana is the princess of Edenia and the daughter of Queen Sindel. She is over 10,000 years old, although she appears to be in her early to mid twenties, due to the much slower rate at which Edenians age. Through the years, she has risen to great importance, first as the loyal stepdaughter of Shao Kahn; then his enemy, tearing herself away from his grasp and freeing her home realm of Edenia; and then leading an army into Outworld to combat any chance of Shao Kahn rising to power again.

Driven by a search for justice, redemption, and peace, Kitana is a strong combination of discipline, intelligence, love and perseverance. She shared a subtle love interest with Earthrealm champion Liu Kang until he was murdered by the Deadly Alliance, though they were briefly reunited prior to his resurrection. She has aligned herself on the good side, despite her loyalty to Shao Kahn for most of her life until learning the truth about her past and real family. Kitana has an evil clone named Mileena and the two are arch-enemies.

Her beauty hides her true role as a personal assassin for Shao Kahn. Seen talking to an Earth realm warrior. Her motives have come under suspicion by her twin sister Mileena, but only Kitana knows her true intentions.

She is a blue lady that has a nice face, compared to her sister Mileena (her face is like Baraka's). She uses a fan which she throws and can elevate an opponent with it.

Kitana first appeared in Mortal Kombat II as Shao Kahn's daughter and personal assassin, working alongside her supposed twin sister Mileena. After years of loyally serving Kahn, Kitana uncovered the truth about her past, discovering that she is actually the daughter of Edenia's King Jerrod and Queen Sindel, taken as Shao Kahn's own when he conquered their realm. She also learned that Mileena is not her sister but a grotesque clone of her created by the wizard Shang Tsung. Kitana vowed to overthrow Shao Kahn and entered the tournament. Her actions came under the suspicion of Mileena, who was spying upon her. Kitana then fought against Mileena and killed her.

During the events of Mortal Kombat 3 (where she appears in Liu Kang's ending) and Ultimate Mortal Kombat 3 (in which she was added as a playable character), Kitana was put on trial for treason and the murder of Mileena. She escaped and joined the warriors of Earthrealm to free Sindel who has been resurrected and being used by Kahn to invade Earth. After convincing her friend Jade to join her, Kitana freed Sindel from Shao Kahn's hold, leading to his defeat at the hands of Liu Kang. Kitana and Sindel then liberated Edenia from Outworld.

Their jubilance was short-lived, as during Mortal Kombat Gold, Shinnok and his grand vizier Quan Chi invaded from the Netherealm. Kitana was taken prisoner, but managed to escape and rejoin her Earthrealm allies. Shinnok's forces were defeated, with Edenia once more free, Kitana finally proposed to Liu Kang, offering to rule Edenia with him as King and Queen, however he reluctantly rejected her, seeing his true duty as Champion of Earth. After Shinnok's defeat, Kitana imprisoned Mileena but learned that Shao Kahn had survived his defeat on Earthrealm and was trying to regain his strength in Outworld. Knowing when he regained his power he would threaten Edenia again, she forged an alliance with Goro and his race. The combined armies wiped out much of Kahn's forces, but eventually were in stalemate.

In Mortal Kombat: Deadly Alliance, Kitana learned that Shao Kahn has been slain by unknown assassins. Thinking her fight is finally over, she began to journey back to Edenia, hoping she can now live in peace. However, she encountered Kung Lao who told her of the plans of "Deadly Alliance" of Quan Chi and Shang Tsung, responsible for Shao Kahn's demise, to revive the Undead Army of the legendary Dragon King. She also learned of the murder of Liu Kang. Despite Kitana's grief upon learning of Liu Kang's death at the hands of the Deadly Alliance, she again joined her old Earthrealm allies against the new threat. Eventually, Kitana and her allies assaulted Shang Tsung's palace where she faced Quan Chi one on one. Unfortunately, despite her new and improved skills gained from training with Bo' Rai Cho, Kitana was outmatched by the powerful sorcerer and killed alongside her allies. Shortly after, they would be resurrected by Onaga, the legendary Dragon King himself, who also put a powerful spell on them, turning them into his loyal servants as Mileena impersonated Kitana as the princess of Edenia.

In Mortal Kombat: Deception Onaga used Kitana to imprison her mother Sindel, knowing the queen would not fight her daughter. Luckily, Sindel was freed by Jade, and together they fled to Outworld where they attempted to find a way to defeat Onaga and free Kitana from his evil influence. Unknown to Kitana, Liu Kang's spirit, which was able to remain amongst the living due to the bond he shared with her,[1] found himself a new ally and friend in Ermac, and the two had embarked on a mission to save their allies as well.

Ermac and Liu Kang were successful in freeing Kitana and the other Earthrealm heroes. Afterward, as she traveled back to Edenia, she encounters Blaze, who warns her of a coming new danger that will threaten all the realms and Kitana is told she needs to assemble the forces of light into battle. Weary of constant battle, Kitana is disheartened, but Blaze assured her that the wars will soon be over. Following this warning, Kitana returned in Mortal Kombat: Armageddon, accompanied by Liu Kang's spirit in order to keep him whole until there was a way to reunite him with his body. They later met up with Nightwolf, who was still drained from using his shamanic powers to draw Onaga's soul into the Netherrealm, and offered to relieve Kitana of her burden by using what magic he had left and took on the responsibility of looking after Liu Kang, and they parted ways once again. In her Armageddon ending, Kitana defeats Blaze and becomes the champion of the Elder Gods. She goes on to form an all-female fighting force consisting of herself, Sindel, Jade, Sonya and Li Mei, and together they set out to defeat the forces of Darkness and trap them in the Netherrealm forever.

In the crossover video game Mortal Kombat vs. DC Universe, Kitana was transported to Metropolis, where she encountered Wonder Woman (her counterpart from DC Universe). Due to the "kombat rage", Kitana hallucinated, believing Wonder Woman to be an "assassin of Outworld" and challenges her. After being defeated, Kitana fled to elsewhere in Metropolis, where she was found and defeated by Scorpion and brought to Raiden's temple, where she explained seeing the fusion of Shao Khan and Darkseid: Dark Khan. Kitana then joined the rest of the Kombatants in traveling to the fused realms of Outworld and Apokolips, and fought alongside them against the DC heroes and villains, and was one of the many knocked unconscious while Raiden and Superman battle and destroy Dark Khan. In her ending, Raiden grants Kitana and her Edenian warriors a new home on Earth—Shang Tsung's abandoned island. The island, which formerly served as the tournament battlegrounds, is converted into a "bastion of beauty and light" and named Argus Island, in honor of the Edenian protector god.

Kitana has been confirmed for the next Mortal Kombat game. 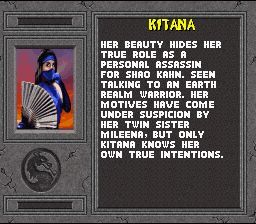