The basic Koopa Troopa was the first enemy the Mario brothers ever faced together. Most Koopas are simple foot soldiers of King Bowser Koopa's army. Though the Koopas started out as Mario's enemy, many of the recent games feature good Koopa Troopas. The word "koopa" is most likely a play on the word "kappa, the name of a mythical Japanese creature.

The shells of Koopas have also appeared as weapons in many games found in the Mario universe.

In the koopas premier title, Mario Bros., a mere touch of these pernicious turtles would lead to the death of Mario and Luigi. "How would one go about defeating this menace?" you may ask. Simple, get them from below! Hit the ground directly underneath the enemy and then jump up to its level and give it a massive kick. Though it's not specifically stated that these turtles are Koopa Troopas (in fact in this game they're referred to as the shellcreeper) it can be surmised that they are the reason that turtles were placed in subsequent Mario games. (The Koopa Troopas in the Game Boy Advance versions of Mario Bros. have been replaced with Spinies so players will know not to try and stomp on these deadly creatures.)

In Super Mario Bros., the Koopas were back with a vengeance (this is the first game to refer to them specifically as the Koopa Troopas). In fact these murderous turtles now came in a variety of colors and breeds. Some Koopas had wings and could fly, these are called Paratroopas.

Green Koopas were a bit daft. These turtles would walk in a straight path as if blind to the world around them. Upon walking into a wall or obstacle they would merely turn around and continue on their merry way. If these hideous creatures happened upon a bottomless chasm of doom they would simply fall to their death.

Red Koopas would not fall for those simple pits in the ground. Though the Koopas gained new abilities and intelligence, they somehow lost the ability to kill by touch alone. Now Mario can stomp any turtle that gets in his way and can even kick the Koopa's shell at other enemies.

A new type of Koopa Troopa makes an appearance in Super Mario Bros. 3. The Giant Koopa Troopas are located on Giant Land. These Koopas exist in the red and green variety.

Super Mario World gave the Koopas even more abilities (and two new breeds) to unleash their wrath upon our valiant hero and his new friend, Yoshi. Now the Koopa Troopas have even learned how to stand and walk on their own two feet...amazing. When Mario stomps on Koopas in Super Mario World the turtle slides out from within his protective shell. The different colored Koopas take different actions when this occurs. Red and green Koopas will climb back into their shell. Blue Koopas will mercilessly kick their shell toward Mario. The yellow Koopas get back into their shell and puts it to use as a weapon of mass destruction by spinning towards Mario which inflicts ferocious damage to allies and foes alike. Outside their shell the Koopa appears in a tank top and boxer shorts.

Yoshi gains different abilities depending on which colored shells he consumes. Yoshi will merely spit green shells back out, red shells grant Yoshi the ability to spit fire, yellow shells allow him to stomp the ground with great fury, and blue shells allow him to fly. If Yoshi devours a flashing shell of a yellow Koopa he gains the power to simultaneously fly, spit fire, and cause earthquakes by stomping.

Though Bowser and his children are closer to dragons than turtles, they are the same species as Koopa Troopas. Its kind of one of those Goofy/Pluto things that makes Darwin turn in his grave. Bowser and all of his children all have the ability to hide in their shell and use it as a weapon. There are many other types of semi-unique Koopas. Pretty much anything with a shell, in the Mario universe, is called a Koopa. But if they're not little turtle dudes, they tend to have more specific names.

Koopa Troopa returns in playable form in Mario Golf: Toadstool Tour and Mario Power Tennis In Super Smash Bros the 'turtle shell' item (a Koopa Troopa shell) is the most basic weapon in the game. Green shells are basically used for whacking people in the head with, while read shells scuttle around the ground, moving back and forth waiting for people to get in their way. In the sequel, Super Smash Bros Melee, Koopa Troopas enemies could be fought in the adventure mode.

Name - (Title(s) of the game that it appears in) 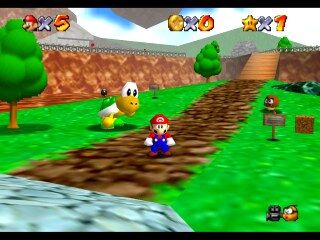 Koopa the Quick behind Mario in Super Mario 64. One of the first friendly Koopas.